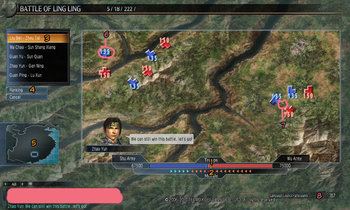 In the Dynasty Warriors games, morale is indicated with a blue and red bar, each representing an opposing side

In games featuring tactical combat (particularly strategy games), players expects their units/characters to fulfill every order to the best of their capacity, e.g. by performing a heroic Last Stand when ordered. Some games, however, feature an improved AI that starts to ignore player's (human or computer) orders when faced with overwhelming odds and instead attempts to flee or to yield.

Morale mechanics usually concern conditions under which the AI will decide to escape rather than continue or even start fighting, such as:

Depending on the implementation, the game may either run a randomized morale check whenever these conditions occur, or slowly chip away at each unit's morale until it flees. Either way, advanced units will typically be more resistant to morale loss than more basic ones. Occasionally, enemy morale may be broken artificially via Standard Status Effects like "Fear" and "Confuse".

Related to Despair Event Horizon and Losing the Team Spirit. Opposite of Attack! Attack! Attack!. Mook Commander may have a play on the troops' morale. See also Sanity Meter, which similarly simulates the game characters' fear of supernatural (as opposed to fear of simple death), and Break Meter, which simulates the enemy's defenses wearing down (rather than their will to fight). For a moral mechanic, see Karma Meter.