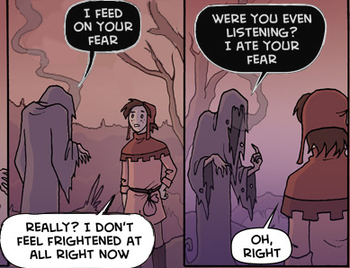 Mr. Dark: Yes. We are the hungry ones. Your torments call us like dogs in the night. And we do feed, and feed well.
Mr. Halloway: To stuff yourselves on other people's nightmares.
Mr. Dark: And butter our plain bread with delicious pain. So, you do understand a little.
— Something Wicked This Way Comes
Advertisement:

Some monsters get no kick from champagne. Mere alcohol doesn't thrill them at all. It's the taste of someone else's emotions that does it for them. An Emotion Eater is someone who draws psychic nourishment or power from another person's emotions, and will usually do what they can to instill those emotions in others.

Due to the Rule of Drama, an emotion eater will rarely feed on positive emotions. Instead they will more likely draw nourishment from fear, hate, envy, or lust, and the process of seeding these emotions can turn Suburbia into a gangland ghetto. If they do feed off of positive emotions, in all likelihood their gimmick is to drain the ability to feel these emotions from their victims, turning them into Empty Shells.

These creatures always work to increase them, no matter how much is already in the world. Evil Cannot Comprehend Good or Blue-and-Orange Morality may lead to "sharing the love" in creepy ways or spreading horror that translates as narm. One way to beat the Emotion Eater can be to deny them that emotion, which can be easier said than done when the fed upon emotion is fear.

The concept has a fair degree of crossover with the "psychic vampire", a type of being that feeds not on blood, but on a person's life force. Usually, this vampirism is at its most potent when the victim is in the throes of powerful emotions. It also often has the side effect of the victim ending up drained and unable to feel any emotion... or worse.

A subtrope to Abstract Eater and, through that, of Fantastic Diet Requirement. Compare The Heartless and Exotic Entree. See also Made of Evil. Less closely related is Gods Need Prayer Badly. Powered by a Forsaken Child is when some sort of mechanism uses this as a power source. As Long as There Is Evil is a closely related trope when a villain is an Emotion Eater on a human race-wide scale. An Emotion Eater may be extra-susceptible to an Emotion Bomb, or they might use them on their prey instead.

See I Know What You Fear for how one particular emotion may be "encouraged".

For all the talk about how villainous most Emotion Eaters are, albeit well-deserved, it should be noted that there are comparatively rare cases of those who use their powers benevolently. Examples of non-malicious Emotion Eaters usually feed by passively absorbing "excess" emotional energy from one or more targets harmlessly or only drain those who consent to the process. If they actively drain targets, they usually take care to only drain negative emotions such as anger, hate, sorrow, or fear, resulting in much more positive or clearer mindsets for the target.

The Dazzlings, aka the Sirens, have to feed on the negative energy of those they mind control with their music in order to gain more power.

The Dazzlings, aka the Sirens, have to feed on the negative energy of those they mind control with their music in order to gain more power.