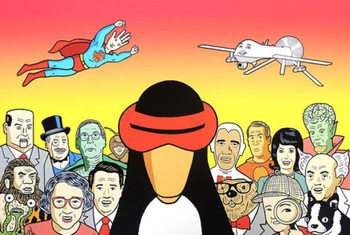 "Panel for panel, the most insightful political cartoonist is the hilarious @tomtomorrow- THIS MODERN WORLD is simultaneously the funniest, scariest & most accurate comicstrip out there!"
—Mark Hamill, from this tweet

This Modern World is a weekly comic strip/political cartoon by Tom Tomorrow AKA Dan Perkins. Appearing in various alternative newspapers around the US, and online at Daily Kos and The Nation, the strip takes a very, very liberal look at current events. Often stars Sparky, an acerbic sunglass-wearing penguin, and the Very Nice dog Blinky.

The strip's official site is here

. The strip is also available here