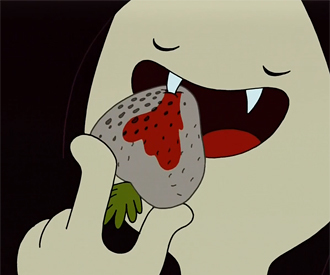 Many characters have Bizarre Taste in Food, but they still eat things recognizable as food. Many characters are Extreme Omnivore, but at least they eat physical objects. In fiction, almost anything can be food, an Abstract Eater eats things which aren't so much things but concepts.

Individuals with these tastes will feed on anything from lost possibilities to sanity, love, or even coolness. Though they may also enjoy the material as a side dish, all of these foodies get some kind of benefit from the abstract dish of their choice.

The process of eating something abstract could be portrayed in any number of ways, as it's up to the creators of the work to describe what it looks like to see something intangible be devoured.

This can often be Horror Hunger, as it often leads to the Eater of the Abstract feeding of the actions or traits of folks like us, leading to humans in behaviour farms and/or a deficiency of the tasty concept in the world or its previous host. A common aspect of Eldritch Abominations, naturally.

There are several subtropes based on the type of abstract food:

In turn, this is a subtrope of Fantastic Diet Requirement.

When prayer is eaten, this overlaps with Gods Need Prayer Badly. If the food is something intangible like "magic" or "life force" it overlaps with Phlebotinum Muncher. See also Dream Stealer, who may or may not eat the dreams.