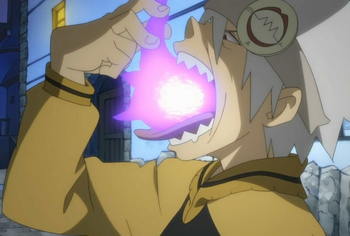 Soul food is the best!
"You know, souls are a bit like taffy. Sweet enough to eat, yet pliable enough to mold into any shape I can imagine."
— Hades, Kid Icarus: Uprising
Advertisement:

This is about a character, or creature, who eats souls. How exactly they devour souls vary from story to story, but the case is almost always the same: the soul becomes a replenishment for someone/something else.

The effect eating souls have, aside from satiating hunger, may be either restoring your health, youth, Life Energy and/or Mana, increasing one's lifespan, gaining their power or knowledge in life, etc.

Many beings that eat souls do it for a living, due to it being the thing that keeps them alive (especially for soul-eating monsters and other creatures), or because they want to live forever or keep their youth, or because they're getting stronger and healthier with every soul they devour. Some rarer cases, however, may occur only once or twice, especially for "mundane" beings who normally don't eat souls.

What happens to the souls they eat, you say? Well, just as how food gets broken down into nutrients for our body, it's assumed that souls tend to get "broken down" into their components that nourish the eater, so the souls effectively cease to be aware or exist. Sometimes, however, the souls that they eat may remain intact in the eater's person, and might even be able to be taken out of the eater. Either way, eaten souls can't go to any afterlife (at least until they're freed, somehow).

If someone has a Soul Power and/or necromancy ability, they may be able to do this.

Sub-Trope of Liquid Assets, Abstract Eater and Your Soul is Mine!. Often overlaps with Vampiric Draining, Cannibalism Superpower, Supernaturally Delicious and Nutritious, and/or Horror Hunger. Compare Soul-Powered Engine for engines that "eat" souls to work, and Soul-Cutting Blade, weapons that harm souls.