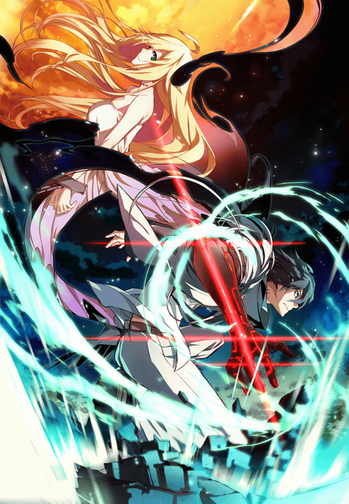 Halt, O time, for thou art fair beyond measure.
I wish upon your unending star – guide me to heights unknown!
"Come, gather and bear witness to my opera, now in the making.
Its script is the height of cliché, I am forced to admit. And yet…
Its actors are of the finest fold; beyond exquisite.
Thus, I believe you will find it enthralling."
Advertisement:

A visual novel by the company Light and the second game in the Shinza Bansho Series that has had a colorful release history.

In Suwahara City, high school student Ren Fujii's relationship with his best friend Shirou Yusa comes to a crashing halt after an unfortunate incident. The fight that resulted lead to a two month hospitalization for Ren. In December 2006, Ren leaves the hospital hoping to live a new life...but that never happens.

In May 1945, as the Red Army storms Berlin and World War II nears its end, a group of Nazi officers use the resulting bloodshed to complete a dark ritual to summon the Longinus Dreizehn Ordennote the Order of the 13 Lances, superhuman harbingers of the world's demise. It wasn't known if the officers succeeded in their goal and with the Third Reich's collapse the incident eventually faded into obscurity.

Sixty-one years later, the Orden makes their appearance in Suwahara City. Despite Ren's desires for an ordinary life, he finds himself forced into a war against the Orden, drifting further away from what he once held dear. Like Shirou once said, "If you live in this town, you'll go mad sooner or later."

Originally intended to be a visual novel with only a single route, Dies Irae underwent some quick rewrites due to Executive Meddling after artwork posted during development lead to interest in characters who were not the main heroine.

On the surface, it's a regular supernatural/alternate history story with lots of Gratuitous German and Canis Latinicus, but it gained favorable attention for its pure focus on Rule of Cool and a character driven plot.

In 2015, the creators of the game launched a crowdfunding campaign

After a leaked image

hinted at an English Steam release earlier in the year, a Kickstarter campaign

for an English localization of the Amantes amentes version of Dies Irae launched in December 2016. The visual novel was released in June 2nd, 2017. An 18+ patch was released 6 months afterwards. The anime was streamed on Crunchyroll. Funimation's Simuldub premiered on October 24th, 2017. Watch it here

titled Dies Irae Pantheon was announced in August 2017, with the series producer hoping for an English localization. Unfortunately, Light's parent company Greenwood closed it's doors in late March 2019, leaving Pantheon tentatively canceled and the fate of the series at large up in the air, including future English localization's.

A What If? sequel that acts as a Happy Ending Override for one of the game's endings, Kajiri Kamui Kagura was released in 2011. A prequel about Wilhelm Ehrenburg, Dies irae ~Interview with Kaziklu Bey~ was released in 2016, the later of which was translated and released to English speaking fans in early 2019.

The release history for this game follows:

Acta Est Fabula (The Play is Over)