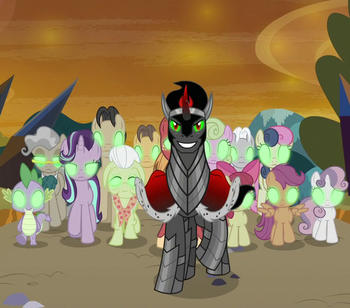 Who needs friends when you have Mind Control powers?
Nova: With Project Muse, Sumeragi can finally administrate all the world's Adepts at once.
Gunvolt: "Administrate"? If that's just a fancy word for what I think it is—
— Azure Striker Gunvolt
Advertisement:

Why use your amazing powers of hypnotism merely to Hypnotize the Captive or make your hero's friend psychotic? Just steal some broadcasting equipment, record your message, and hypnotize the masses to do your bidding, build your weapons, and wipe out the hero.

You could end up with a couple different possible results; the hypnotized people could become zombies, or could stay generally the same but still be compelled to follow you. Pretty soon, you'll have a cities worth of zombielike Brainwashed and Crazy minions that follow your every order and, best of all, the hero can't beat, since they're really just poor Innocent Bystanders.

Compare Do Not Adjust Your Set. Often used to get rid of The Evils of Free Will. See also Glamour, which may be paired with this trope. Anyone who is Weak-Willed will likely remain hypnotized even after the emitter's destruction. If Mass Hypnosis is not merely a means to an end, but rather is the end goal itself, that's Assimilation Plot.