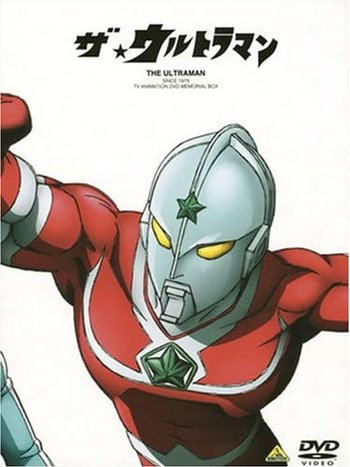 The Ultraman (stylized in Japan as ザ☆ウルトラマン, literally The☆Ultraman) is an anime Ultra Series produced in 1979 as a joint collaboration between Tsuburaya Productions and Sunrise animation studio. In contrast to past Ultra Series, it was produced as an anime and took place in a different world away from the live action Showa Era. The Ultraman coincide its airing with Mobile Suit Gundam in that same year (also an anime produced by Sunrise), with Yoshiyuki Tomino even directed the last four episodes of the series.
Advertisement:

Set in the 21st century, Earth and mankind has been plagued by various monster attacks. From the Ultra Planet U40, the Ultra People sent their strongest warrior Joneus to defend mankind by merging with Science Guard Party officer Choichiro Hikari. At the times of need, Joneus would be assisted by Elek, Loto and five other chosen warriors of U40 to his aid in against alien invaders. The first half of the show portray itself as a standard Ultra Series trope, going on with the standard formula of fighting monsters Once an Episode. Since The Ultraman is an anime instead of live action, the series took a liberal approach of monsters with varying forms, size and appearances.

Starting from episode 37, Heller and his Heller Empire appear to invade the Planet U40 and set their target on Planet Earth as the next planet of invasion. With the series draws closer to its end, The Science Guard Party and Joneus took their battle to space and join the La Résistance in their attempts on fighting Heller while reclaiming their home planet.

Following the end of this series, it was succeeded by Ultraman 80, but the latter's Executive Meddling and poor ratings put the Ultra Series to another 15 years of hiatus.

Not to be confused with The Ultraman, a similarly named 1975 manga drawn by Mamoru Uchiyama (with the exception of the star icon as a separation), although it does receive an animation short as an adaptation during the Japan Animator Expo.

However, the 1979 anime did admittedly took its name from the aforementioned manga, although it doesn't steer into a full blown adaptation and went into its own original story as a whole.

The Ultraman provided with the trope examples below.