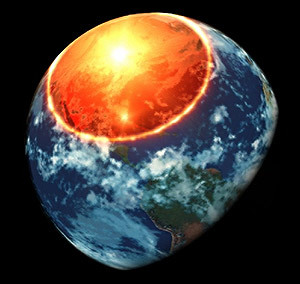 Pretty sure the insurance company won't cover that. They were in the blast radius.
"Heard the roar of a wave that could drown the whole world."
— Bob Dylan, "A Hard Rain's A-Gonna Fall"
Advertisement:

Natural disasters are scary enough, but what about supernatural or man-made disasters? One way to kick-start a story or motivate characters to pick up The Call is to threaten the setting with a World-Wrecking Wave. The Wave can have any of a number of triggers; it may happen when the Sealed Evil in a Can is released, some overwhelming evil force unleashes a powerful Curse, the Cosmic Keystone is stolen or corrupted, a global balance is ruined, or a scientific/technological device meant to better things Goes Horribly Wrong - or a Mad Scientist has figured out how to weaponize Applied Phlebotinum. The wave can have any or all of the following effects: natural disasters will be triggered, mutations will affect animal, plant, and even human life, areas will enter the Dark World or become haunted and toxic, and millions of Mooks (monsters, undead or other things) will roam the land and attack all humans. Maybe all of the humans in radius of the wave are turned into something else, or the planet might be scoured of life.

Once the wave stops rippling, the heroes will be faced with a world where Nothing Is the Same Anymore. The effects can range from a Cosy Catastrophe to After the End, and affect anywhere from a town to a universe. While you can be fairly certain the world will still be there afterwards, the fate of the setting after the Wave is whacked closer to Crapsack World (or further down the same). Narratively, it isn't supposed to destroy the world either - unless the world is expendable, it's an amped up way to show heroes that things can get much, much worse if the bad guys get their way.

On the plus side, heroes can sometimes Set Right What Once Went Wrong, though the method by this varies - it can be a piecemeal process involving healing the land one acre at a time, or all at once by healing the Fisher King, going back in time to prevent the event, or using an opposing World-Healing Wave. Also, a World-Wrecking Wave may end up helping the heroes by serving as a Mass Super-Empowering Event... though some of those may be Lovecraftian Superpowers.

Expect a Spreading Disaster Map Graphic to hammer home the scope of the threat. Compare Fantastic Nuke, which may set off a World-Wrecking Wave. Contrast a Earth-Shattering Kaboom - for the world doesn't survive the experience. For when the World-Wrecking Wave is used with the express purpose of changing the planet to one's preference, see Hostile Terraforming.