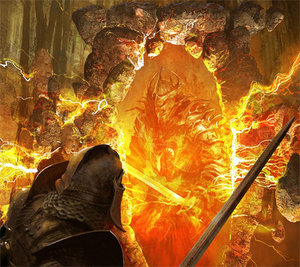 Abandon all hope, ye who enter here. note (Unless you're the Hero of Kvatch, in which case, loot to your heart's content!)
"Legend has it that it was written by the Dark Ones. Necronomicon ex Mortis. Roughly translated: Book of the Dead. The book served as a passageway to the evil worlds beyond."
— Evil Dead 2, Opening Narration
Advertisement:

A Hellgate is a connection — doorway, portal, interdimensional weak spot, Wormhole, Negative Space Wedgie, whatever — between the normal world and someplace bad. Whether it explicitly links to Hell, Hyperspace, a Dark World or just to Another Dimension, the primary plot function of the Hellgate to allow legions of scary, evil weirdness to invade our world.

A Hellgate can be a permanent fixture of the setting, in which case it will function as a Magnetic Plot Device, putting the "adventure" in the City of Adventure and providing a new monster for the protagonists to fight every week.

Other times, the Hellgate itself is the driving force of the plot (or maybe just a MacGuffin): the protagonists seek to close the gate, or to prevent it from being opened in the first place, or even to destroy it. This type of Hellgate tends to be more dangerous, and may even cause The End of the World as We Know It if left unchecked.

Not to be confused with a body of water in New York City next to Astoria or the eponymous bridge over it.