Video Game / Shadows of the Damned 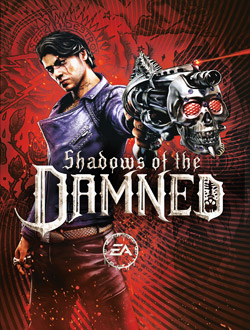 Garcia Fucking Hotspur Is About To Shoot You.
"This is your old barrio, right, Johnson? Then you can be my tour guide."
"Me? But I quit the whole demon thing ages ago... and really, my memory's absolute rubbish."
"Oh, I'm sure it will come back to you in no time. Relax amigo. This is going to be an adventure. Our very own Road Movie. And the best part is... you never know what's waiting around the bend."
— Garcia Hotspur and Johnson.
Advertisement:

Shadows of the Damned is a Third-Person Shooter developed by Grasshopper Manufacture and published by Electronic Arts. The game was conceived from the minds of Shinji Mikami, Massimo Guarini and Suda51, with with a soundtrack composed by Akira Yamaoka. It is a comedic horror game with a camera similar to Resident Evil 4, resulting in an ample amount of Refuge in Audacity, gore humor, and haminess. The title was originally developed as Kurayami, but EA's Executive Meddling ended up twisting the game into a still fun but far different and less trippy product. It was released in June of 2011 for the PlayStation 3 and Xbox 360

Our story details the tale of Garcia Hotspur, Demon Hunter as he attempts to save his girlfriend Paula from the Lord of Demons: Fleming. It's a good thing he's got Johnson, a floating skull and former demon who is both his sidekick and his Swiss-Army Weapon.

Despite Shadows of the Damned's pedigree, it bombed, due to a near-complete lack of marketing and its extremely short playtime. A single run through the game is about six hours long and there's no New Game option to replay with all your upgrades in place. Some sources have claimed that Shadows's sales on its opening week were as low as seven thousand.

Example of:
City of the Damned