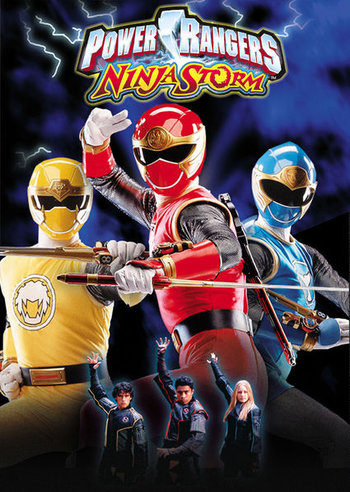 The 11th season of Power Rangers, adapted from Ninpuu Sentai Hurricaneger. First season produced after Disney moved production from MMPR Productions to Australian-based Village Roadshow. By a funny coincidence, former MMPR-Turbo producers and writers Doug Sloan and Ann Austen worked for Disney at the time, and asked if they could helm this season. Disney agreed, the pair brought in writers, including series veteran Jackie Marchand, and the result was an Affectionate Parody that loved its lampshades.

Evil ninja Lothor wants to conquer the Earth, and his first step is to eliminate all of the secret ninja academies that would rise up to stop him. Unfortunately for him, three of the students at the Wind Ninja Academy decided to be Good Samaritans that day and were fixing some old couple's car instead of going to class. Shane, Tori and Dustin are widely recognized as the worst students in the school, despite potential and good intentions, but now they're our only hope. Assisted by their Sensei, who has been turned into a guinea pig by Lothor, and his snarky son Cam, they have a long way to go.

Lothor soon decides to fight fire with fire, and convinces a pair of adoptive brothers from a rival academy that Sensei was responsible for the deaths of their parents. Eventually, things are sorted out and they become the Navy and Crimson Thunder Rangers. And even after that, Cam, fed up with his father's refusal to train him as a ninja and the others underestimating him because of it, travels back into the past, obtains a mysterious artifact from his mother, and becomes a more traditional Sixth Ranger, the Green Samurai Ranger. Things come to a head as Lothor continues to sacrifice minion after minion, general after general, and the Wind Rangers begin to understand that their presence in this fight isn't as much of an accident as they might have thought.

As stated above, Ninja Storm was an Affectionate Parody, and lampshaded every trope and gimmick Power Rangers had invented. Regardless on whether or not you found the jokes funny, it still had a few standout elements here and there. Particular note goes to Cam, who, despite being in a less popular series, rose to be in almost as many (if not as many) Power Ranger fan theories as Andros and Tommy.

First series of Power Rangers to: 1) have only one girl, 2) switch the Blue and Yellow Rangers' genders, 3) begin with three Rangers, then add two, then add one more, and 4) be filmed in Auckland, New Zealand (where it was frustratingly banned from being broadcast due to the standards of violence), which of course meant the hiring of local actors thus leading to 5), the first season to deal with Ooh, Me Accent's Slipping.

This season unfortunately broke the chain of the last season team up episode started in Lost Galaxy, possibly due to the move to New Zealand as well as budget and union issues. Next season would continue the trend, however.

Not to be confused with the Naruto Shippuden: Ultimate Ninja Storm games.