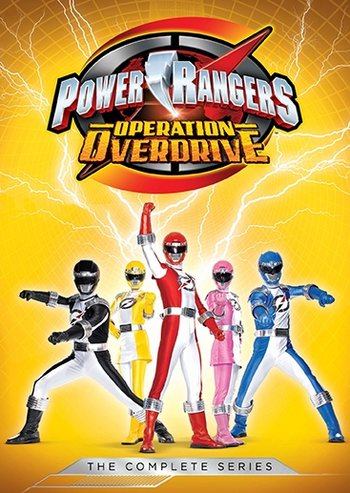 The fifteenth anniversary season of Power Rangers, adapted from GoGo Sentai Boukenger. Legends speak of the ''Corona Aurora'', the Crown of the Gods; an ancient jeweled relic with inconceivable power. According to the myths, millennia ago, two brothers warred with each other in their pursuits of the crown, only for the crown to turn them both into monstrous forms and seal them into planets. Afterward, the crown was taken and its jewels removed, all being sent away to an Insignificant Little Blue Planet...

In the present day, Adventurer Archaeologist Andrew Hartford has at last found the crown - but the discovery frees the brothers, Moltor and Flurious, from their respective prisons. Realizing that they and other villains would come seeking the crown's power, Hartford uses his wealth to assemble and equip a team to track down and claim the crown's five gemstones before they fall into the wrong hands. He assembles a team of four people with unique histories - Rose Ortiz, a former Child Prodigy and a teacher with incredible intellect, Ronny Robinson, an F1 driver, Will Aston, a notorious thief, and Dax Lo, a Hollywood stuntman with dreams of acting. Hartford grants them their Overdrive Trackers and one by one enhances their DNA to have genetic powers. Hartford initially intends to take on the Red Ranger role himself, but he's prevented from doing so by an attack from the villains. His sheltered son Mack transforms himself to save him, earning him the last spot on the team.

Operation Overdrive has a few quirks compared to a usual Ranger season. For one thing, instead of using mainly self-contained Monster of the Week adventures, the season tracked the Rangers and villains as they followed a trail of clues around the world to the location of the jewels. It also had a Big Bad Ensemble instead of just one Big Bad, and these villains tended to fight each other as much as they fought the Rangers. Over the course of the series, Red Ranger Mack also learned something horrifying about his own origins that nearly destroys his faith in himself and his relationship with his father.

The series also contained the 15th Anniversary special "Once A Ranger" where a new villain comes into play: Thrax, the son of Rita Repulsa and Lord Zedd. Targeting the Morphing Grid itself, they manage to cut off the Overdrive Rangers from their powers. To stop their plan of decimating the entire grid and eliminating all Power Rangers, the Sentinel Knight recruits Rangers from previous seasons to form a new team (all of the Disney-era shows, with one before they took over): Xander Bly, Bridge Carson, Kira Ford, Tori Hanson, and Adam Park (most of them were Ensemble Darkhorses; the return of Johnny Yong Bosch especially was appreciated). In addition, Alpha 6 takes on a role. The two-parter involves the Operation Overdrive Rangers worrying about being replaced.

While ratings for this season started out good, they would later go on to crash and burn — a major slump that the final two Disney seasons never really recovered from.