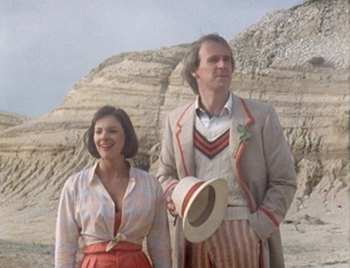 "What a desolate place this is."
"I've been to many planets in the solar system, and you'd be surprised how many of them look like quarries in Wales."
— David Tennant, Never Mind the Buzzcocks
Advertisement:

The ISO Standard alien planet set, as used endlessly in Blake's 7, Doctor Who and even The Hitchhiker's Guide to the Galaxy (1981) TV series. It was a disused or rented quarry, full of interestingly dull rocks and fascinatingly monotonous scenery, the perfect alien-landscape-on-a-budget — the British equivalent of Kirk's Rock. As a bonus, since shooting in a quarry means you're below the surrounding ground level, anachronistic structures/features aren't readily visible and don't require expensive sets or more expensive post-production work to conceal. The abundance of different levels and flat rocks to stand on means there's plenty of places to set up cameras for additional angles, too.

So common was the quarry usage by these series that according to Gareth Thomas, who played Blake in Blake's Seven, there was one occasion when they heard noises at the other side of the quarry, and discovered Doctor Who was filming there at the same time (though evidence of filming dates shows this may be apocryphal).

The quarries were usually not owned by The BBC, but rented for filming from businesses like Lime Works.