Recap / Doctor Who S12 E5 "Revenge of the Cybermen" 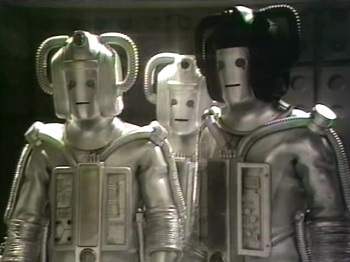 "Who is this guy? We were expecting to see someone else."
"You've no home planet, no influence, nothing. You're nothing but a pathetic bunch of tin soldiers skulking about the galaxy in an ancient spaceship."
— Now go away, Cybermen, or the Doctor shall taunt you a second time.
Advertisement:

The one with the cursed production.

Written by Gerry Davis. This four-episode serial first aired from April 19 to May 10, 1975.

The Time Ring gets the Doctor and companions off of Skaro and back to Nerva Beacon all right — but at the wrong time (typical shoddy Time Lord tech), instead putting them many millennia earlier than their previous visit. At this time, the station is an active radio beacon controlling space traffic around Earth, particularly with reference to a new asteroid in orbit around Jupiter — a "planet of gold" called Voga. However, all is not going well. A space plague is rife on the station and has killed all but a few of the crew, and the Doctor and friends are of course immediately suspected.

The space plague turns out to be poison, spread by a traitorous scientist, Dr. Kellman, on behalf of the Cybermen. They want to destroy Voga because of their weakness to gold. Sarah Jane is infected with the plague, but she's cured by Harry through the use of a transmat system. Upon their arrival on Voga, they're captured by Vogans (no, not those Vogons) working for the power-hungry head of security, Vorus. Vorus is confronted by the Vogan leader, Tyrum, who chastises him for making contact with humans. The Vogans have been strictly isolationist for centuries because their planet was nearly destroyed by Cybermen in the last war. Vorus insists on taking action, leading to a brief civil war between his faction and Tyrum's.

When the Cybermen arrive, the Doctor and the remaining crew from the beacon are forced to carry Cyber bombs into the heart of Voga, but the Doctor exploits the Cybermen's radar system and rids himself of his bomb to make contact with the Vogans. It seems that Kellman is in fact working for Vorus, luring the Cybermen onto Nerva Beacon, which the Vorus had planned to destroy with their Skystriker rocket. The Doctor returns to the beacon to save Sarah Jane, who had returned there to save him. Despite clever repurposing of a Cybermat to attack the Cybermen, the Doctor is captured.

The Cybermen, realizing their plan has failed, load the beacon with explosives and aim it for Voga, evacuating and leaving the Doctor and Sarah Jane aboard to die. The Skystriker is launched (well, a painfully obvious Saturn V rocket being palmed off as a Vogan anti-Cyberman rocket is launched), but the Vogans manage to divert it to hit the Cybermen's ship. Though the Cybermen locked the controls of the beacon before their departure, the Doctor manages to enable the secondary controls just in time to keep the beacon from destroying Voga.

The TARDIS appears back on the station, having been sent to catch up with them by the Time Lords, and on boarding the ship, the Doctor receives a message from The Brigadier, requesting assistance back on Earth...

Barring a cameo in the Third Doctor story "Carnival of Monsters", this is the only appearance of the Cybermen in The '70s, and the only Tom Baker story to feature them. They hadn't appeared since the Second Doctor's "The Invasion" in The '60s and wouldn't return again until the Fifth Doctor's "Earthshock" in The '80s. The serial was written by Cyberman creator Gerry Davis and had uncredited rewrites by script editor Robert Holmes. This was also the first story to be released on home video at the end of 1983 on VHS, Betamax and LaserDisc.

HARRY SULLIVAN IS AN IMBECILE!

At the end of part three and start of part four, Harry accidentally triggers a rockslide that knocks the Doctor out before almost setting off the bomb strapped to him by trying to undo the buckle. When the Doctor wakes up and realizes what just happened, his reaction is... less than sedate.

HARRY SULLIVAN IS AN IMBECILE!

At the end of part three and start of part four, Harry accidentally triggers a rockslide that knocks the Doctor out before almost setting off the bomb strapped to him by trying to undo the buckle. When the Doctor wakes up and realizes what just happened, his reaction is... less than sedate.