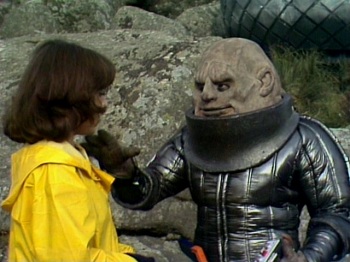 Aw, come on! I just wanna stroke your hair!
"It's absolutely typical of Harry. How anyone in his right mind can fall down a whacking great subsidence like that..."
— The Doctor begins to despair of his new companion already.
Advertisement:

The one where Harry spends a scene coming close to lecturing the viewers about those rocks.

Written by Bob Baker and Dave Martin. This two-episode serial first aired from February 22 to March 1, 1975.

The Doctor decides to do a favour for the people of the Nerva Space Station, and beams down to Earth to check out if it's safe to re-colonize. Landing on an old teleport pad, the Doctor, Sarah and Harry find a rather... smooth and barren Earth. Nevertheless, the Doctor claims they're actually in the centre of what used to be London, and encourages Harry and Sarah to go sightseeing while he does some work on bringing the teleporter back up to spec.

Harry promptly falls down a crevasse— which, in his defence, had been deliberately concealed with branches. Faced with this worrying evidence that the planet isn't as deserted as it's supposed to be, Sarah hurries back to the Doctor, only to find that he's disappeared. While she's away, Harry finds and begins following a passage that seems to lead out of the crevasse, so when Sarah returns, he's disappeared too.

The Doctor has been captured by a group of astronauts from one of Earth's interstellar colonies, which are apparently still going strong. They're in an unfriendly frame of mind: they landed in response to a distress call, only for their ship to be destroyed and several of their crewmates to mysteriously disappear. As a stranger wandering about without a plausible explanation for his presence, the Doctor immediately becomes the focus of their suspicions.

Meanwhile, Sarah meets the setter of the pit-trap, who saves her from being captured by a robot that's roaming the area (which is what he set the trap for). His name is Roth, and he's one of the missing astronauts. He's also clearly deranged, and Sarah is not sure how much to believe of his story, which involves being captured by the robot, tortured by its alien master, escaping, and being afraid to return to his crewmates because one of them, Vural, was also captured and is now serving the alien.

Though he won't go near his crewmates, he shows Sarah where to find them, and creates a distraction while she rescues the Doctor. The Doctor, Sarah, and Roth go back to the crevasse to look for Harry, where the Doctor goes down into the crevasse. While he's down there, Sarah and Roth are captured by the robot and taken to the alien.

The alien is, in fact, Field Major Styre of the Sontaran Military. Sarah is terrified, recognizing him as a Sontaran like Linx from her first story (and briefly thinks that he is Linx, because the Sontarans are a clone species who all look alike, not that the radically different mask Sontaran actor Kevin Lindsey wears in this story indicates that). Styre shoots Roth, and takes Sarah off to be tortured.

Harry has been watching this, and tries to rescue Sarah, only to find she's imprisoned behind some kind of forcefield. He heads off to find the Doctor, and along the way finds another of the missing astronauts, who has been chained up and deprived of water for days. Harry tries to help him, but he dies rather gruesomely of thirst shortly afterwards.

The Doctor finds the same passage out of the crevasse Harry used and, retracing Harry's path, finds Sarah being exposed to a device that forces her to hallucinate her fears. He's able to disable the force field and free Sarah from the device, but is shot and left for dead by Styre.

When the Doctor recovers, he collects Harry and Sarah and they head off to see what Styre is up to now.

The remaining three astronauts are captured by Styre's robot, and it's revealed that astronaut Vural really is working with Styre in hopes of sparing his own life. Which doesn't work, as Styre now tortures all three astronauts. Because he needs to figure out the various resistances of humankind in order to report back to Sontaran Command on if Earth can be taken over easily. You know, despite it being abandoned. The Doctor shows up and challenges Styre to mortal combat, and the pair begin to fight. Vural dies trying to help the Doctor.

Sadly, the Doctor doesn't beat Styre in combat, but he buys enough time for Harry to mess around with Styre's space ship. Battered but not defeated, Styre flees back to his ship to feed on energy... only to melt and explode from whatever Harry messed with. The Doctor then speaks directly to Sontaran Command and plays a few mind games with them — convincing the Sontarans that the Earth isn't something to mess with right now. The day saved, despite only two of the original nine astronauts remaining alive, the Doctor and companions hop back in the teleportation pad to go back to Nerva Station and let them all know that the Earth is just fine and dandy now.

This is the only two-part adventure in The '70s, which had only happened twice before in the First Doctor's era as a money-saving measure, and wouldn't happen again until "Black Orchid" in 1982. It's also one of very few to not involve the TARDIS even by implication: the Doctor and companions arrive and leave by transmat beam.