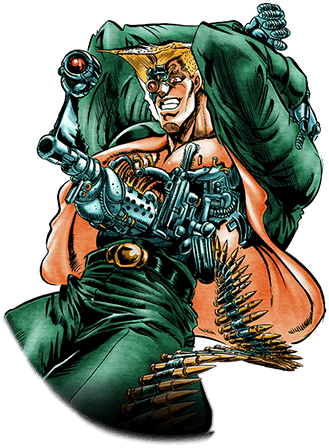 Fortunately, the gun's in his guts and not his butt.
"Might I sugest agin, a skul-gun for my head. Yesterday in Batery Park, some scum we all know pushes smack for NSF gets jumpy and draws. I take 2 .22's, 1 in flesh, 1 in augs, befor I can get out that dam asalt gun. If I could kil just by thought, it would be beter. Is it my job to be a human target-practis backstop?"
— Gunther Hermann's spelling-error filled email, Deus Ex
Advertisement:

Sometimes simply holding a weapon just isn't cool enough. Some characters just have to have weapons in the most unexpected places, like on their shoulder, on their head, or even inside a limb. Maybe they just have so much dakka that they can't fit any more weapons in conventional places. Or maybe they're just weird.

Compare Natural Weapons for when they're already part of the wielder, Handy Feet for doing things with your feet (including wielding a weapon) when they normally would require your hands, and Backpack Cannon for weapons mounted in/from a backpack (i.e behind your back). See Phallic Weapon if the weapon's placement is suggestive.