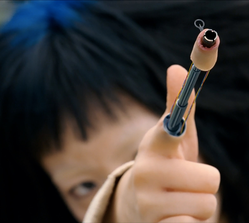 For when your friends won't lie down when you say, "Bang! You're dead!"
Gemini: Here, let me give you a hand.
Kim Possible: How often have you used that line?
— Kim Possible
Advertisement:

Various parts of the body have been weaponized in fiction and the fingers are no exception despite their small size. Aside from Rule of Cool, the two most common reasons given for this setup are increased firepower and concealment.

open/close all folders
Firepower
Fingers weaponized for firepower are usually a specific variation of the Arm Cannon which involves placing a ranged weapon in every finger and occasionally the thumb as well. Smaller machines may have all fingers linked to a common magazine or ammo management system while larger units can have a separate system in the same finger as its gun. There are also cases where the fingers are merely barrels.

This layout is more often used in 'raw power' machines to indicate their destructive ability. The implication is that the unit has many times the firepower of a grunt's main weapon- by having eight or ten of that weapon in its hands alone.

The primary claimed benefit of this design is that it offers More Dakka without sacrificing finger articulation. This ignores the fact that flexible or folding barrels would severely reduce the durability of the guns. Proposed workarounds include housing the entire weapon system in the fingertips, reducing the power of the weapons, making all the fingers rigid rather than articulated or having articulated fingers that go rigid before firing- all of which sacrifice either hand or weapon functionality. In the end, Rule of Cool is the only proper justification.

Pay special attention to the fingers of a Humongous Mecha if they appear to be flexible hollow tubes or if they sport openings or lenses at the ends because these indicate guns. 'Mittens' with rows of barrels are sometimes used by designers who want to mix things up, though these are even less practical as they lose all but the most basic hand functions. Some less humanoid designs may have hand-mounted guns that double as fingers rather than fingers with guns inside, usually in cases where the machine has fewer than five fingers on each hand.

Concealment
Concealed finger guns can be made virtually indistinguishable from unarmed fingers, particularly if the user's unarmed fingers also look mechanical. Any gun parts that appear on security scans can be handwaved as part of the hand's mechanisms (which they technically are). Mechanical or mechanically augmented characters who have not previously been shown with weapons can be revealed to sport these without stretching Willing Suspension of Disbelief.

Apart from the design difficulties listed in the firepower section, concealed finger guns also need an even greater degree of miniaturization or integration with the rest of the hand to keep them from being detected, placing further limits on their functionality. Cruder designs that impede the function of the fingers to allow greater power also make detection easier. Finally, risk of detection by internal scans complicates the inclusion of any built-in magazine as most ammunition has a distinctive appearance, limiting the guns to a small number of shots per weapon if solid rounds are needed.

Due to all these limitations, concealed finger guns are usually used for assassination or self-defense. However, Humongous Mecha may make effective use of this design by concealing anti-personnel weapons in their fingers- these may not be effective on other large machines but are enough for infantry and light vehicles or aircraft.

NOTE: Guns installed in the metacarpal region (i.e. behind the base of the finger or even further back) should go under Arm Cannon, Power Palms or Hand Blast instead. For the gesture involving making a gun with one's fingers, see Finger Gun. The use of said gesture to channel magic or psionics belongs there as well. Stuffing the finger in a gun is Finger in a Barrel. For other deadly uses for fingers, see Finger Poke of Doom.