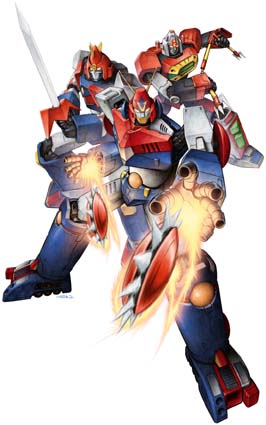 The three robots of the trilogy: Combattler-V, Voltes-V and Tosho Daimos
The Robot Romance Trilogy is a Thematic Series of three Super Robot television anime produced by Toei and animated by Sunrise that were aired during the late 1970s.
Advertisement:

All three shows were created by Saburo Yatsude (not an actual person, but a collective pseudonym for Toei's staff) and directed by Tadao Nagahama. Yoshiyuki Tomino collaborated in at least two of them.

The trilogy is notable for presenting more complex storylines than those of most other Super Robot shows at the time, and indeed, the idea behind the trilogy was to create something that wasn't simply an overly long toy commercial. They also showed up fairly often in the early days of the Super Robot Wars video game series, although Combattler V and Voltes V have appeared more often than Daimos (an easy explanation of this is that the two used the same energy source, "Super Electromagnetic/Choudenji", which makes for easier crossover implementation).

Voltes V and Daimos in particular are very famous in the Philippines, as anime used to be Banned in the Philippines under the Ferdinand Marcos regime. Due to both shows dealing rather heavily with civil wars and/or resistance of some sort or another, they became movement mascots against Marcos isolationism, with Voltes in particular becoming a genuine Filipino cultural icon, far more famous there than in Japan.

If you want to watch how most of the tropes used in the trilogy were born, watch the Mazinger saga (Mazinger Z, Great Mazinger and UFO Robo Grendizer) and Getter Robo. If you want to watch how those tropes are deconstructed, watch Zambot3, Space Runaway Ideon and Neon Genesis Evangelion. If you want contrasting how those tropes are used in other kind of Humongous Mecha shows, watch Mobile Suit Gundam -and other series of the franchise- and Patlabor. Watch Raideen to know about their immediate forefather and GoLion (or Voltron) to learn about their most famous heir. If you want to see how the Super Robot Genre is made nowadays, watch GaoGaiGar and Tengen Toppa Gurren Lagann. Lastly, if you are interested in more Yoshiyuki Tomino shows, watch Daitarn3, Aura Battler Dunbine, Xabungle or Overman King Gainer.

The Robot Romance Trilogy series are: