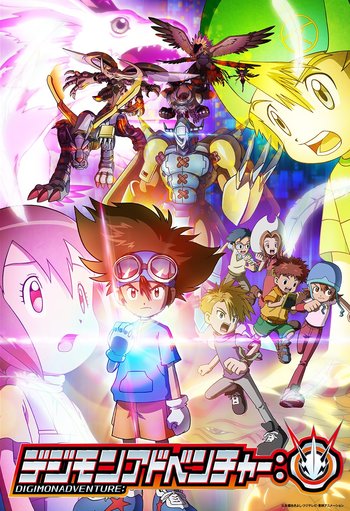 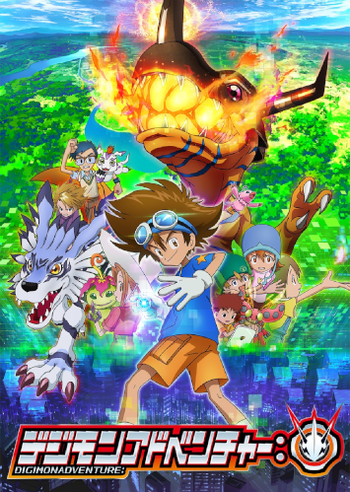 The adventure continues to a new world.
Advertisement:

The year is 2020, and the internet is an integral part of everyday life. Unbeknownst to everyone, however, exists another world within the internet: the Digital World, where creatures known as Digital Monsters, or Digimon, roam about. However, evil Digimon start attacking the Digital World, causing large-scale network failures throughout the real world, which the clueless authorities can only chalk up to cyber-terrorism.

Taichi Yagami, a fifth-grader preparing for a weekend summer camp, was rushing to Shibuya in order to help his mother and his sister Hikari after their train went out of control. However, Taichi, alongside six other children, gets transported into the Digital World, where they meet their Digimon partners in an effort to Save Both Worlds from unknown threats.

Thus, a new Adventure, both familiar and different, begins...

Digimon Adventure: is a Continuity Reboot of Digimon Adventure, the 8th Digimon TV series, the first since Digimon Universe: App Monsters in 2016, and the Milestone Celebration in celebrating the 20th anniversary of the Digimon franchise. The anime premiered on April 5, 2020, on Fuji TV in Japan and subbed on Crunchyroll worldwide. An English dub was announced in February of 2022.

You can watch it subbed on Crunchyroll here: [1]

Being a Continuity Reboot of the original series, spoilers for that will be included! You have been warned!

This anime contains the following tropes: