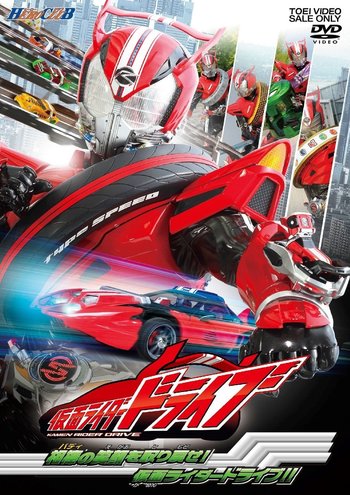 Start your Engine!
"This man, is a police detective, and a Kamen Rider!"
Advertisement:

Kamen Rider Drive is the 2014-2015 Kamen Rider series; the sixteenth entry in the franchise's Heisei era and the twenty-fifth series overall. Riku Sanjo returns as the head writer after Kamen Rider Double.

The Global Freeze: an infamous event in which the world came under attack by mysterious beings who caused time itself to slow down. Six months later, peace has returned but the world remains alert for future occurrences of the "Density Shift" phenomenon.

Shinnosuke Tomari is a young and talented police officer who sank into depression and lost all motivation after he accidentally crippled his partner during the Global Freeze. Because of this, he has been reassigned to the "Special Investigations Unit", a division of Bunny Ears Lawyers specializing in cases involving Density Shift (known colloquially as "Slowdown") and other unexplainable phenomena.

When the perpetrators of the Global Freeze, a series of rogue AIs called "Roidmudes", emerge from dormancy, Shinnosuke discovers that his car (and its sentient belt) gives him the power to move normally during Slowdown and battle the Roidmudes on equal terms. Shifting his life back into gear, Shinnosuke transforms into Kamen Rider Drive to take down the Roidmudes and solve the mysteries surrounding them once and for all.

This series is most notable and gained much press because, for the first time in the franchise's long history, the title hero exclusively uses a car, rather than a motorcycle. On top of that, Drive is the first Rider to have an automobile motif, which up to this point was mostly utilized in Super Sentai seriesnote  Turboranger, Carranger and Go-Onger, to be precise..

Aired alongside Super Sentai shows Ressha Sentai ToQger and then Shuriken Sentai Ninninger, the latter of which sharing a one hour crossover with as well as hosting a cameo in the spring Rider movie, in the Super Hero Time block.

Voted #11 series in the Heisei era, and #15 product overall in NHK’s All Kamen Rider Popularity Ranking.

The Mad Doctor Shift Car is capable of immediately healing the killer poison circulating through Shinnosuke's system. However, as Mr. Belt explains, the treatment can be "as painful as death". But despite the indescribable agony, it works.

The Mad Doctor Shift Car is capable of immediately healing the killer poison circulating through Shinnosuke's system. However, as Mr. Belt explains, the treatment can be "as painful as death". But despite the indescribable agony, it works.