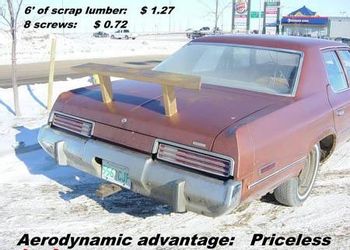 You want your flying car? Here you go!
"With all the money that these morons dump into modification, they could have saved up and bought a real sports car in a couple of years instead of pretending like they drive one now."
— Maddox, The Best Page in the Universe, "You Drive A Honda Civic, Not A Race Car

Any ordinary consumer car that has had its outer body modified to give the impression that it's a high-performance vehicle. These modifications will be almost purely aesthetic and do nothing to actually improve the car's performance. The fact that the owner thinks otherwise shows you the kind of person who would drive one.

As such, these are the kinds of things they will have:

The name derives from the perception that many of the cars so modified are Japanese, and tend to be thought of as boring, underpowered economy cars. This, of course, leads to Unfortunate Implications, which has led there to be alternative terms for cars from different parts of the world (e.g. "pasta rockets" for Italian cars, "wheat burners" for American cars, or "kraut burners" for German cars — not that this makes anything better), and the creation of the backronym "RICE" (for "Race-Inspired Cosmetic Enhancement"). The term "rice burner" or "ricer" is a more American phenomenon; Brits would call them "chaviots" (from the derogatory term "chav", meaning Lower-Class Lout); Russians would call the process "ara-tuning" ("Armenian tuning", hinting at its popularity in the Caucasus region); Poles would use the term "agro-tuning" ("agriculture-tuning", suggesting this is a specialty of yokels from the countryside); and Japanese have "Itasha" (a rice burner with an additional embarrassing fanboy aesthetic) and "dekotora

" (for "decorated truck", the same principle but applied to big rigs). The kind of people who would drive such a car have long been known as "boy racers

A Sub-Trope of Pimped-Out Car. See also Red Ones Go Faster and Awesome, but Impractical. Hummer Dinger is usually the SUV/offroader equivalent. Thememobiles, if done right, almost always fall into this trope.