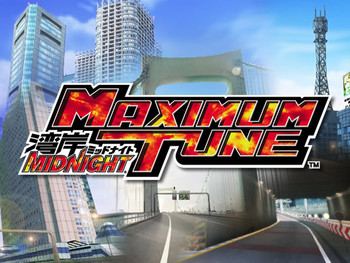 Roar through at over 300 km/h.note And try not to bump into one of the ten million Namco-paintjob cars on the road.
"Man to man. Car to car. Legend creates new legend. The Wangan story begins now..."
— Introduction to the game's story mode
Advertisement:

Wangan Midnight is a racing game based on the Japanese manga of the same name.

Wangan Midnight, developed by Genki and released in 2001 as an arcade game, plays much like Shutokou Battle—the object is to drain the opponent's Life Meter by maintaining a major advantage or causing the opponent to crash into things. It got an Expansion Pack called Wangan Midnight R, and PlayStation 2 and PSP ports. A more fleshed-out Wangan Midnight game made its way to the PlayStation 3.

Wangan Midnight Maximum Tune (currently marketed as just Maximum Tune in North America), developed by Namco, is the set of Wangan Midnight games as most fans know it. Originally released in 2004, Maximum Tune features a card system not unlike that of Initial D Arcade Stage's, more lenient and drifty driving physics, more colorful graphics, a more traditional "point A to point B" racing system, and a tuning system in which you can tune your car all the way to 800 horsepower by completing 60 stages of Story Mode.

Maximum Tune has become successful enough to receive multiple sequels, with each new one adding features such as 4-player racing, a more coherent Story Mode, more horsepower, and new courses like the Hakone mountain pass and new stretches of the Tokyo expressways.

Yes, now it begins. My TV Tropes story with examples...!

Please check that your game is over before leaving your seat
You may get a continue from another player
note Please wear a mask and wash your hands when playing.