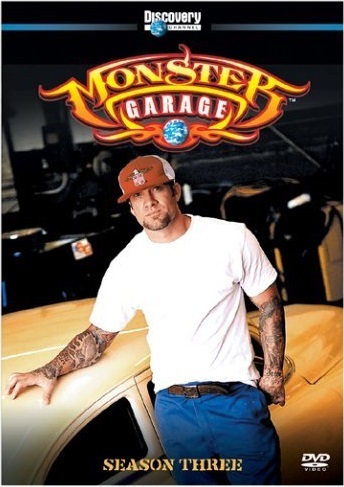 "Join us now as Jesse James and his gang of maverick mechanics rip, grind, and burn transforming ordinary street vehicles into monster machines in the Monster Garage."
— Opening narration
Advertisement:

Monster Garage was a program running from 2002-2006 on the Discovery Channel hosted by West Coast Choppers' Jesse James (before his ill-fated marriage to Sandra Bullock). The premise was unique: Jesse and a crew of expert mechanics (a different crew each week) would take a normal car and modify it into a specific type of functional vehicle. The rules were that 1) the car must appear to be stock when the conversion was complete, 2) the crew may spend no more than $3000 (or $5000 starting with the third season) on parts, and 3) the crew only has a week to perform the conversion (one day to design, five days to build, one day to challenge an actual example of the finished product).

As the series went on, projects diversified into race cars and custom cars as well as the usual "monsters". Successful crews would be rewarded with a new set of tools. If a crew fails to complete the build, the car is destroyed in over the top fashion.

The series had a spinoff show called Monster House (no, not that one) which aired from 2003 to 2006, and featured a different weekly team of carpenters making "extreme" renovations to homes.