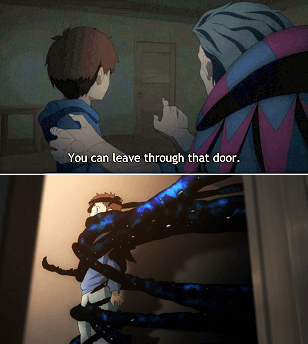 You can check out any time you like, but you can never leave!
"They almost always run. If not too inconvenient, I let them. Hope can break a man, the thought that he's escaped. Safe. Only to find out his every action has been utterly futile."
— The Shadow, Dynamite The Shadow #8
Advertisement:

A character is about to face utter defeat. Suddenly, he finds a glimmer of hope, a reservoir for strength, a possible way out, a ray of light, a Forgotten Superweapon or what have you… only for it to be crushed by the bad guys returning in force. Think of it as the opposite of Near-Villain Victory.

Hope spots can be used to add drama to an extended encounter with a villain and will often culminate with the hero getting up after a seemingly decisive blow. However, if handled poorly, they can detract from a story.

Subtropes include Diabolus ex Machina. In extreme versions, may presage a Cruel Twist Ending. The Kaizo Trap is a subtrope exclusive to video games. Your Princess Is in Another Castle! also counts as this when the heroes think that everything is over for them, but the villains escape and the heroes have to take them down again.

Note that this trope can be shaded by Values Dissonance: villains obviously wish to triumph (or at least come through in one piece) just as much as heroes do, so a Hope Spot for a villain also counts, no matter how much despair it would cause heroic characters.

Any visible sigh of relief? After escaping imminent peril? Take a Moment to Catch Your Death.

The direct opposite of Darkest Hour. Contrast with Tear Dryer. One reason why Hope Is Scary and why the Hope Bringer is not always welcome. The Hope Crusher loves engineering this sort of situation.

Due to the bait-and-switch nature of this trope and how heavily it relies on the audience going in blind, expect spoilers.

Blu does this at the aerial football match as he easily makes it past the red macaws to their net and scores the point against his team.

Blu does this at the aerial football match as he easily makes it past the red macaws to their net and scores the point against his team.