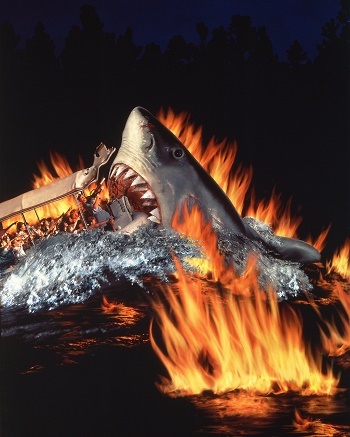 Brody: Amity 6, this is Chief Brody, I'm on my way, I'll be there in ten minutes.
Skipper: Ten minutes? We'll be shark bait in ten minutes!
Advertisement:

The JAWS ride is a boat-based attraction currently at Universal Studios Japan, and formerly, at Universal Studios Florida. The premise of the attraction revolves around you boarding "Captain Jake's Amity Boat Tours" to be given a ride through the island during its Fourth of July celebration. However, things go horribly wrong when one of the tour boats is destroyed and its passengers killed, the culprit being none other than the shark itself. The riders and the boat's skipper are then forced to face off against the ravenous shark; the confrontation taking them into an eerie boathouse, a very-combustible gas dock, and an electrical power barge. Anything that can go wrong will go wrong.

The ride first opened with Universal Studios Florida on June 7, 1990... sort of. It experienced massive technical issues that at times left the ride completely unoperational. A mere few months after it opened it was shut down indefinitely, with Universal suing the manufacturers of the ride; as the malfunctionings of the ride were so bad that it would have to be rebuilt from scratch. As a result, the ride remained closed for three years until Spring 1993 when the ride system was completely reworked and some of the show scenes were changed in order to make it less technically complex.

Despite being a very beloved fan-favorite throughout the years, the ride was closed yet again, but this time permanently, on January 2, 2012, to make way for The Wizarding World of Harry Potter: Diagon Alley. The decision attracted a heavy amount of outrage that lasted for quite a while; since then it has subsided a bit, due in part to how successful the Diagon Alley replacement turned out to be.

As a form of remembrance, Diagon Alley has a few Easter Eggs in its scenery shouting out the original JAWS movie.

The ride also opened with Universal Studios Japan on March 31, 2001, and continues to remain open to this day.

Amity 6 to base, come in base...
This is base, you are cleared for departure, Amity 6. Have a good trip!
Advertisement:

The JAWS ride provides examples of the following tropes:

This is Amity 6, call off those marines, we are coming home!