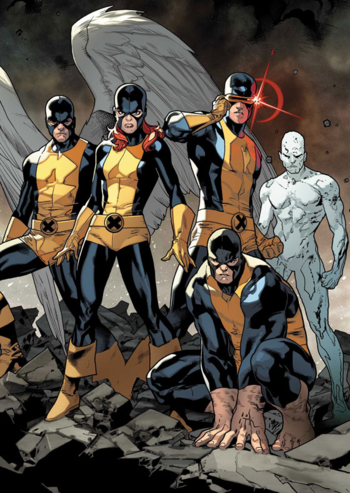 After the events of Schism and Avengers vs. X-Men, the X-Men have broken apart down ideological lines. At the former mansion, Wolverine, poorly suited to the task, is headmaster at the Jean Grey School with several other mutants who followed him from Utopia. His goal: teach them to survive in a world that hates and fears them.

The Phoenix Five, plus Magneto and minus Colossus, led by Scott Summers, are on the run. After using their Phoenix powers to change the world as they saw fit, they're now considered terrorists. Cyclops has them teleporting around the world to rescue or approach new mutants as they manifest. Cyclops' goal: time for a revolution, and he needs an army.

Dr. Hank McCoy, dying as a result of further mutations, hears an offhand remark from Iceman, along the order of: "If only Scott could see himself..." and decides that's a brilliant idea. He goes to the past and brings the original five X-Men to the present day in hopes of young, idealistic Cyclops finding a way to get through to current Cyclops. The young X-Men, stunned by the revelation, take a vote and decide to stay to help things become closer to the dream Professor X brought them together to realize. Events progress and it becomes clear that not everything was as they were told upon arriving, in addition to several changes in the team dynamics and emotional impacts, which result in the O5 X-Men and Kitty Pryde deciding to join the New Xavier School in hopes of being able to continue their attempt to bring mutantkind and mankind together.

Due to the nature of the series many events cross over and/or happen concurrently with events in Wolverine and the X-Men (Marvel Comics) and with Uncanny X-Men respectively. The Cyclops series spun-out of this series, and its page also contains spoilers regarding this book.

A second volume was released following the events of Secret Wars, featuring the original time-displaced X-Men (sans Jean who departed for Extraordinary X-Men) and X-23, as well as the additions of Idie Okonkwo and Genesis/Evan both primarily hailing from Wolverine and the X-Men (Marvel Comics). In this volume, the teens split from the X-Men and travel across the world, refusing to be intimidated by the terrigen threat and continuing their heroics. The series was relaunched as X-Men: Blue in April 2017. Afterwards, the team became key players in the Extermination event, which serves as the Grand Finale for the story that started here.