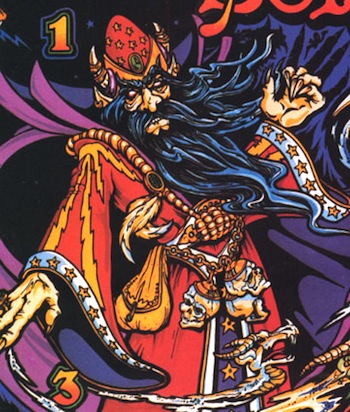 I don't think he's wearing those skulls to be trendy.
"Each Legion that falls beneath me. Each house that we vanquish. Each people that we destroy. I keep mementos. I have hundreds."
— Apollyon, For Honor
Advertisement:

One way to celebrate a victory, as well as to remember a foe that is particularly hated or respected, is to take a piece of them as a keepsake.

The object in question should be something personal and connected with the enemy, such as an Iconic Item or, more morbidly, part of their own body. The victor might wear this piece, either to impress his allies or to taunt or demoralise his remaining enemies.

On a larger scale, one country can do this to another, taking a captured land's artworks and sigils for its own.

These might be kept in a Trophy Room or, especially for heads, mounted on a wall. In Video Games, this is often combined with And Your Reward Is Interior Decorating.

Related to Creepy Souvenir, Decapitation Presentation, Robbing the Dead, Plunder, A Scar to Remember, Shrunken Head. Superhero Trophy Shelf is a subtrope. As is often Nemean Skinning. Will likely be related to Unsportsmanlike Gloating.

Dick Jett owns a nazi flag, having gotten it from a nazi he brutally killed in WWII.

Dick Jett owns a nazi flag, having gotten it from a nazi he brutally killed in WWII.