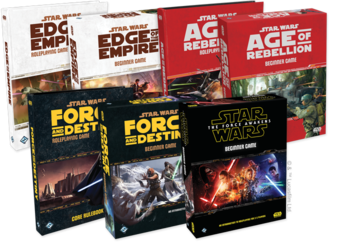 Star Wars Roleplaying Game is the third major incarnation of the Star Wars Tabletop RPGs, published by Fantasy Flight Games to succeed West End Games' Star Wars d6 and the Wizards of the Coast's Star Wars d20. It currently consists of three sets, all based on the same Game System set by default around the same time (between A New Hope and The Empire Strikes Back), but each with different narrative and gameplay focus:

While each core rulebook has three specializations available per career, each career received a dedicated sourcebook that adds an additional three specializations. Each game line is cross-compatible with the others, allowing players and Game Masters to use material in all three without converting anything. In addition, the rules allow players to purchase new specializations for their characters outside their starting career, including those across game lines, and some books contain universal specializations that count as in-career for everybody.

This makes it possible for a Mercenary Soldier (Hired Gun, from Edge of the Empire) to eventually throw in with the Rebel Alliance and pick up the Sharpshooter (Soldier) specialization from Age of Rebellion, or even learn some social graces and choose a different kind of specialization like Ambassador (Diplomat). Later still, they could unlock their Force potential with a universal specialization and pursue any of the specializations from Force and Destiny: the arcane Seer (Mystic), a daring Navigator (Seeker), or a lightsaber-wielding Shii-Cho Knight (Warrior).

After the last line-specific book was released (Cyphers and Masks, the Spy career sourcebook for Age of Rebellion) FFG changed focus to universal sourcebooks that could work with all three lines. Some of them were era-specific, such as books focused on the Clone Wars (Rise of the Separatists and Collapse of the Republic) or the period between the Origial Trilogy and the Prequel Trilogy (Dawn of Rebellion), and they added new careers and specializations as well. Others were compendiums of useful stat blocks (Allies and Adversaries, Gadgets and Gear, and Starships and Speeders) that had additional resources not provided in previous books, like iconic weapons or new player species.

Fantasy Flight Games has since restructured and no longer publishes or develops the game internally. Instead, a sibling company within Asmodee, EDGE studio, who translated the previous books in the game line, will be doing so. They have said the books will be entirely compatible with FFG's game, so it is not a new edition.

open/close all folders
The Dice
The game uses a unique set of dice with symbols on them rather than numbers. A conversion table for using a standard set of numbered polyhedral dice is provided in the books and an official roller app

is available if you want to cut costs:

All dice applying to a skill check (including Force Dice, if the character is using a Force power) are rolled simultaneously, then the Successes, Advantages, Failures, and Threats are totaled up. If Successes outnumber Failures, then the skill check succeeds; otherwise, it fails. Additionally, if the Advantages outweigh the Threats, the situation as a whole improves for the character somehow. Having more Threat means the situation worsens—the players and the GM are encouraged to come up with creative explanations for either case. It is perfectly possible for a skill check to succeed but leave the PC worse off in the long run because of the Threat rolled, but on the other hand a failed skill check can also bring about unexpected benefits.

The Game System used for this game has been released separately as a Universal System, called Genesys.

A list of all sourcebooks based on their game line:

Alternative Title(s): Edge Of The Empire, Age Of Rebellion, Force And Destiny