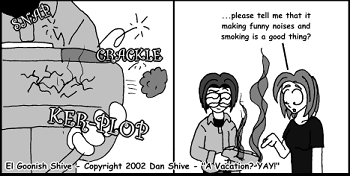 Is something making funny noises and smoking ever a good thing?note Well, maybe if the something is Cheech Marin.
The Doctor: I think you'll find I'm universally recognised as a mature and responsible adult.
[shows Kazran the psychic paper]
Kazran: It's just a lot of wavy lines.
The Doctor: [looks at paper] Yeah, it's shorted out. Finally, a lie too big.
— Doctor Who, "A Christmas Carol"
Advertisement:

Things break. This is just a natural rule of the universe. Even the Green Rocks are going to fail to work at some point.

Of course, this is TV, so when your Applied Phlebotinum breaks down, it is always going to do so at the worst possible minute. Or, to quote Dark Helmet: "Even in the Future, nothing works!"

What's worse is this: real things that you may have encountered in your daily life often break. When they do, they either function at a reduced capacity or not at all. This can happen on TV, but it is at least as likely that, rather than simply not working, they will do something else entirely, perhaps even something more spectacular than the thing they do if you Reverse Polarity.

The thinking is this: the transporter does something really amazing and miraculous when it's working. Just imagine how amazing and miraculous a thing it could do if it were broken. Never mind that this is no more logical a line of thought than, say, "A functioning toaster makes toast, but a broken one might start suddenly making French toast! Or maybe even sausage links!!"

Fortunately, if it's Tim Taylor Technology, you can usually fix it by applying more power. Unless it's vulnerable to Phlebotinum Overload, that is... then something will Go Horribly Wrong. If you're really unlucky, it'll work fine up until when you need it most.

Holodeck Malfunction is a subtrope, as is Teleporter Accident on occasion. Compare Plot-Driven Breakdown.