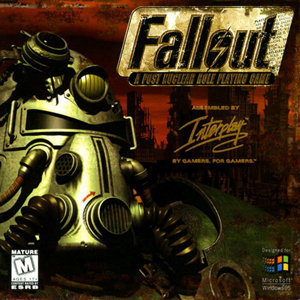 Fallout: A Post Nuclear Role Playing Game (1997), the first game in the eponymous series. Compared to the rest of the series, it is unarguably the most straightforward, and most true to the original vision for the franchise.

The year is 2161: 84 years after all human society was destroyed in nuclear war. The world is a largely inhospitable wasteland populated by lethal mutants and tiny communities of survivors who live a hardscrabble existence trying to grow crops out of terrible soil and toxic rain. Lawless raider tribes make their lives even harder by stealing what little they have at every opportunity. Luckily for you, though, your ancestors had managed to secure their place in Vault 13 — a gigantic underground city built specifically to survive the apocalypse. You've been there all your life, and it's an okay place to live. There's plenty of food, clean water, and friends, and the Overseer keeps everything nice and orderly. But life in the Vault is about to change.

One day, the water purifier's control chip — the only thing ensuring the continued production of fresh water in the Vault — breaks. There's no way to fix it. The only way to get another one is to seek out another Vault and take theirs. To do that means someone has to leave the vault. The Overseer has decided that the only fair way to decide who leaves is to gather the most capable inhabitants of the Vault and have them draw straws. Guess who drew the shortest? You did.

You leave the Vault for the first time. All you can see is a dark cave filled with giant, hungry-looking rats and poor Ed's skeleton lying just outside the entrance: you weren't the first person to be sent on this mission. All you have with you is a jumpsuit, a few standard-issue survival supplies, and a single weapon from the armory. All you know is that there's another Vault to the east, which might have another control chip. To top it all off, the Vault door you just came out of won't respond to your entry password.