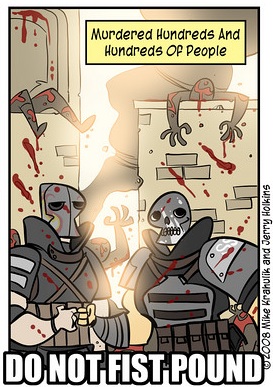 "It's hitting bed crisis time, and I just don't know where I can physically fit any more severely ill children on my ward. Still, listen, sorry to unload on you; how was your day at the ice cream factory?"
— That Mitchell and Webb Look
Advertisement:

The mood of a story or scene is the net effect of many different elements: the dialogue between the characters, the soundtrack, and the use of light and color in the background, to name a few. Artists will specifically select those elements that work together in unison to create the desired mood.

Or not. Some artists will introduce one element into a scene that completely rubs against the prevailing mood. However, rather than undermining the prevailing tone, this Mood Dissonance can make it stand out further. Rather than drowning each other out, the contrasting elements resonate against one another.

Of course, that's when it's done well. When Mood Dissonance is done poorly, the varying elements simply cancel each other out, rendering the final product a confusing mess, or worse.

Note that cases such as the page quote are very common (and often done deliberately) in Real Life, since people with jobs dealing with sickness and death are still human.

Inversions of Empathic Environment are common. The Empathy Doll Shot is a specific subtrope. Crapsaccharine World is when the dissonance is an inherent part of the story's setting. Soundtrack Dissonance and Lyrical Dissonance are music-specific subtropes. Scenery Dissonance is a subtrope involving the scenery contrasting with the nature of the events happening in it. See also Mood Whiplash, when the differences in mood are sequential rather than simultaneous. A Happy Flashback can be used to render a sad present scene more poignant. Compare Art-Style Dissonance.

Candace is chased by a horde of rabid animals, all set to a peppy song about having a happy day.

This Day is A-OK

Candace is chased by a horde of rabid animals, all set to a peppy song about having a happy day.

This Day is A-OK