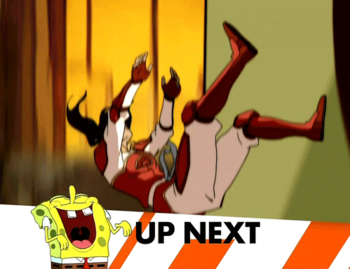 Way to keep the mood there, SpongeBob.
Advertisement:

A trend of a commercial blurb in the form of a "pop-up" style graphic (audio optional) during a show. Commonly called "snipes" by broadcasters, these ads are typically not for products, but for the network's programming. They are not to be confused with logos used to identify a channel — which are usually called "bugs". However, snipes are often designed to interact with bugs (often triggering animations or other effects to it when a snipe appears).

Often, they advertise what show is on next or later that day on the same channel. Sometimes, it can be a commercial popup indicating what show you are watching and what network you are watching it on. Occasionally the broadcaster will even go so far as to put a logo or text near the bug or in a different corner of the screen, to remind people that it is in fact a NEW EPISODE!!

◊ and not some ancient old one, or put up an #EngineeredHashtag telling people that they can talk about the show on social media with it. The stations justify this because some people DVR and record shows—this is also how the networks can remind people who are watching a pirated program where the program originated from, and ensure pirates at least buy the DVD to pirate from.

A similar trend is to start airing commercials during the credits of a show or movie by smashing the credits to one side of the screen and showing promos on the other. The credits are usually sped up and muted in favor of the shocking revelation coming on later tonight. You can bet that if you see or hear "stay tuned for scenes from next week's show" at the end of the episode before the commercial it'll be this.

Beyond just reclaiming some of the valuable advertising time they had previously wasted on actual show, these popups serve several other purposes linked to the rise of digital video recorders:

If the pop-up is a countdown to something the network considers high priority, then it's a New Content Countdown Clock. Compare to Breaking News Interruption, when a program gets interrupted for breaking news.

A commercial pop-up parody from "Summer Belongs to You".

A commercial pop-up parody from "Summer Belongs to You".