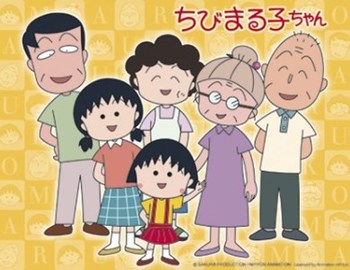 Chibi Maruko-chan is one of Japan's premier Shōjo manga, and the source of one of their longest running children's programming anime. The original manga ran from 1986 to 1996 in Ribon with 17 volumes, becoming one of its longest running titles there as well.

The story is about a 9-year-old girl, Momoko Sakura (named after the author's pen name) or otherwise Maruko/Maru-chan. She lives with her family of 6, including her big sister, father, mother, and paternal grandfather and grandmother, in old Shimizu-shi, today part of Shizuoka-shi.

Nickelodeon India and Animax Asia used to have their own separate Asian English dubs, and a Canadian dub was Direct to Video.

Since 2018, a modern English dub can be found on the official channel

on YouTube. The English dub is very faithful to the original Japanese version and changes almost no names or cultural aspects.

Definitely not to be confused with Crayon Shin-chan or Cyborg Kuro-chan.