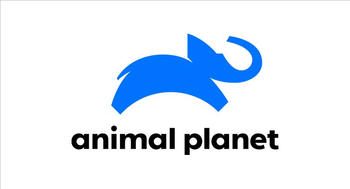 Animal Planet is one of the Discovery Channel's sister channels. It, as the name indicates, originally focused on animal shows, most especially shows about endangered animals. It also hosted animal competitions, including agility competitions, several high-quality dog shows (including the Westminster Kennel Club show and the Eukanuba Tournament of Champions) and even some equestrian events, including the Rolex Championships. Has begun to suffer a degree of Network Decay in recent years, as the programming lineup has begun to stray from its animal-centric orientation. However, it has since began to return to its animal-related programming as of 2018 thanks to rebranding its logo and slogan, an with the introduction of a new series focused on Steve Irwin's son Robert and daughter Bindi running the Australia Zoo called "Crikey, It's the Irwins!"

Advertisement:
Shows on this Network: