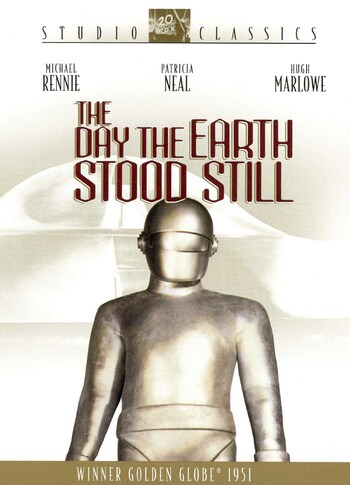 Klaatu Barada Nikto
"The universe grows smaller every day, and the threat of aggression by any group, anywhere, can no longer be tolerated. There must be security for all or no one is secure."
— Klaatu
Advertisement:

The Day the Earth Stood Still is a 1951 black-and-white Science Fiction film directed by Robert Wise. The screenplay by Edmund H. North was adapted from the 1940 short story "Farewell to the Master" by Harry Bates.

The Human Alien Klaatu (Michael Rennie) lands in Washington, D.C.—in a classic flying saucer—during the Cold War. The paranoid military shoots him, prompting his robot guardian Gort to go on a rampage. Klaatu stops Gort, then informs the President of an important message he brings for all of Earth's leaders... who can't agree on a meeting place. Klaatu is placed under guard at Walter Reed Hospital, but escapes and, under the name "Mr. Carpenter", goes to live among the people of Earth. He takes a room in a boarding house and befriends the residents, including a widow named Helen Benson (Patricia Neal) and her son Bobby (Billy Gray).

After meeting with respected scientist Jacob Barnhardt (Sam Jaffe), Klaatu decides to demonstrate his power by stopping the flow of electricity everywhere in the entire world—except for airplanes in flight and hospital electronics—for exactly half an hour. (This is the event referred to in the title, though nobody calls it such within the story.) The military takes this as a sign of hostile intent. Klaatu and Helen race to the saucer landing site, where a meeting of the world's top scientists has been hastily arranged by Barnhardt, but the military hunts Klaatu down and kills him.

Shortly before they catch up with him, Klaatu gives Helen a message to deliver to Gort in his own language: "Klaatu barada nikto." Gort re-activates upon Klaatu's death and vaporizes the soldiers guarding him, but Helen's message diverts Gort into retrieving Klaatu's body before anyone else is harmed. The robot temporarily revives Klaatu, who warns the people of Earth of Gort's true purpose: he, and other robots like him, were built to enforce peace in the galaxy... and if humans insist upon bringing their warlike ways into space, they will be destroyed. Klaatu leaves Earth with a simple phrase to mull over: "The choice is yours."

There was a 2008 remake, directed by Scott Derrickson and starring Keanu Reeves as Klaatu. Some of the plot was also copied for Plan 9 from Outer Space.