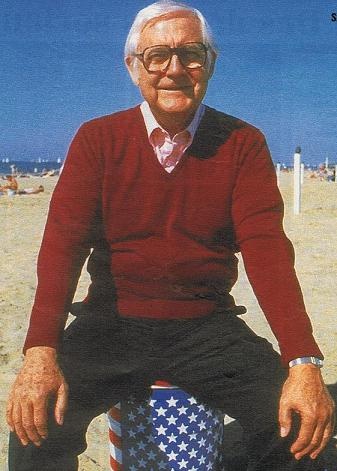 A man who started his career in Hollywood in 1934, Robert Earl Wise (September 10, 1914 – September 14, 2005) was involved with pretty much every major film project, in every studio department, in every major genre that you can possibly imagine.

According to his bio

at IMDB, Wise worked several odd jobs at RKO until someone noticed his talent as a sound editor, and the rest is history. From 1934-35, he worked as a sound editor (vastly uncredited) for movies like Of Human Bondage, The Gay Divorcee, The Informer, and Top Hat, before moving on to editor of Bachelor Mother, 5th Ave Girl, The Hunchback of Notre Dame, My Favorite Wife, and Dance, Dance, Dance, before his first major job on Citizen Kane, being handpicked by the the legendary Orson Welles. Not known by many, his first directing career was actually on The Magnificent Ambersons, uncredited, nonetheless, but a major step in a young filmmaker's career.

Genres covered by Wise included science fiction, horror, musical, Western, and war films, with repeat successes within many of those genres. As a director, Wise is remembered for his disciplined work ethic and use of storyboards. Having come up through the technical side of the film industry, Wise had a thoroughgoing familiarity with the technical side of filmmaking. His facility for visual effects dated to his use of Linwood Dunn's advanced new optical printer in compositing matted shots for Citizen Kane, as editor. Wise made extensive and effective use of visual effects not only in science fiction films such as The Day the Earth Stood Still, but in more conventional settings, such as the New York City of West Side Story (1961), and the 1930s disaster setting of The Hindenburg.

He also produced the telecast of the 43rd Academy Awards Ceremonies in 1971.