Film / The Day of the Triffids 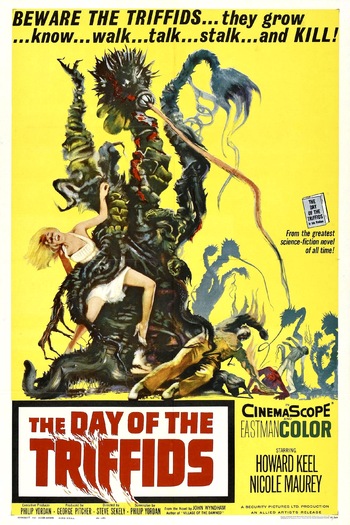 The Day of the Triffids is a 1962 British Sci-Fi Horror film loosely adapted from the classic novel of the same name by John Wyndham, directed by Steve Sekely and Freddie Fancis.

A mysterious meteor shower blinds everyone who sees it, and also brings to Earth the spores of mobile and hostile Plant Aliens called triffids. Bill Masen (Howard Keel), who is in hospital with his eyes bandaged due to an eye injury, ironically thus becomes one of the few people in Britain with intact eyesight; the film follows his struggles to find safety in the ensuing chaos.

In a subplot invented for the film, marine biologist Tom Goodwin (Kieron Moore) and his wife Karen (Janette Scott), who are stationed on an island lighthouse and have also retained their sight, struggle to find a way to defeat the triffids. In the end, almost by chance, they discover that the triffids are dissolved by sea water, and the world is saved.