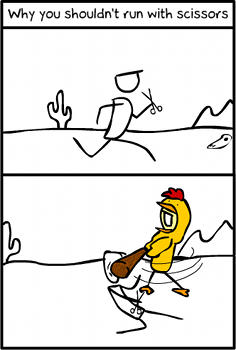 Buffy: I told one lie. I had one drink.
Giles: Yes, and you were very nearly devoured by a giant demon snake. The words "Let that be a lesson" are a tad redundant at this juncture.
— Buffy the Vampire Slayer, "Reptile Boy"
Advertisement:

The author has an important Aesop for the audience. There's an urgent course of action they want you to take, and they've decided to show you the tragic consequences of not doing so.

Trouble is, the real consequences, while they may be serious, aren't the sort that can easily be made to fit the Rule of Perception. Maybe they take decades to show up, if they show up at all. Maybe they happen so subtly that it's hard to show why the action should be taken.

Worse, maybe there isn't yet agreement on what the real consequences are. How can we be sure what will happen to the Earth if we drive all the humpback whales extinct?

So the author dreams up some improbable, highly unforeseeable consequence to scare you into complying.

When done right, the improbable consequence will be a close analogy or a sharp metaphor to the probable one — just increased in scale, speed or concreteness. You know irreparable damage will be done to the Earth's ecosystem if the whales go extinct, but not what irreparable damage; and so, you arrange it so that the absence of whales leads to aliens endangering all life on Earth — especially the humans.

When done wrong, it'll defy all logic. Often, how well it comes off depends on how close you're looking and (if the consequences are still unknown) what you believe.

Named for (and derived from) the plot of Star Trek IV: The Voyage Home, which can best be summed up as "Don't let whales go extinct, or else an alien probe will eradicate the planet."

This trope should not be confused with Fantastic Aesop. The Fantastic Aesop promotes or discourages a course of action which can't even be attempted in the real world (e.g. "Never use black magic to resurrect your dog") by showing a reasonably plausible set of consequences ("Poor beloved Tropey Came Back Wrong"). The Space Whale Aesop promotes or discourages a course of action which can be attempted in Real Life ("don't perform nuclear tests") by showing consequences that strain credibility ("radiation from the tests will awaken a giant monster that destroys Tokyo") instead of a more realistic but not quite as dramatic example ("it can burn whole buildings if someone is careless"

Overlaps with Gaia's Vengeance if the intended message is an environmental one, which it often is. Overlaps with Spoof Aesop when the author is more interested in the space whale than the Aesop. Overlaps with Abusive Advertising if the message is "Buy our product or you'll meet with a grisly end somehow."

This is not necessarily an indefensible trope. If your purpose is to both teach the audience a highly applicable lesson and to entertain them with a fantastic scenario, then a Space Whale Aesop is probably the best way to go. And speaking about entertainment, Rule of Funny may also be a huge factor in some more complicated cases. Also, sometimes you just can't fit the realistic consequences of an action into a twenty-three-minute episode or a 120-minute film, so you need to speed things up a bit. It also helps if the fantastic consequences can be interpreted as a metaphor for the realistic ones rather than trying to portray a real-world result.

Before posting anything think for a second: "Is this supposed to be an Aesop?" If it was not intended as an Aesop then that is an Accidental Aesop.

Morty disobeys his grandpa's order to remain inside his spaceship vehicle. This causes him to get bitten by an alien snake and kill it. Morty feels so bad that he purchases a regular snake and sends it to the alien snake's planet. Unfortunately, Morty's actions make the other alien snakes realize there's life outside their own world, causing them to go after Morty. The lesson? "STAY IN THE (bleep)ING CAR!"

Morty disobeys his grandpa's order to remain inside his spaceship vehicle. This causes him to get bitten by an alien snake and kill it. Morty feels so bad that he purchases a regular snake and sends it to the alien snake's planet. Unfortunately, Morty's actions make the other alien snakes realize there's life outside their own world, causing them to go after Morty. The lesson? "STAY IN THE (bleep)ING CAR!"