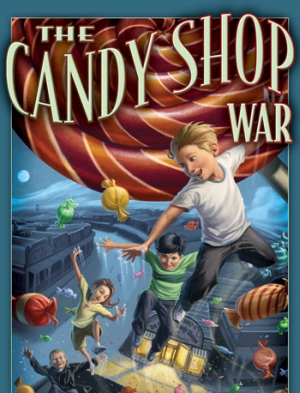 The Candy Shop War is a children's/young adult fantasy novel by Brandon Mull, who also wrote Fablehaven. If you're familiar with the latter, you probably know what you're in for here: Quirky, Young At Heart's Urban Fantasy with a striking amount of darkness.

Cynical Nate is the new kid in the tiny town of Colson, California. On his first day, he has the good luck to fall in with the Blue Falcons, a group of friends with a nondescript club (It's gone from treasure-hunting to tresspassing and more). Clever Trevor, fearless Summer, and brainy Pigeon (real name: Paul) quickly come to like snarky Nate, and accept him into the club after he charges local bullies Denny, Kyle, and Eric. Nate isn't the only new thing in town, though: There's also a new candy shop, the Sweet Tooth Ice Cream and Candy Shoppe. The kids stop in for some candy after a rough first day at school, and are pleased to find that the shopkeeper, Ms. White, is as kindly as she is good at making candy. But she accidentally lets slip word of "Secret Candy." What's this now? She promises she'll tell them if they ask again after getting to know her more. So they do a few chores for her shop. She gives them a "special assignment:" Go get some beetle eggs in mushrooms. They do, and she gives them a taste.

The "special candy" is magical. The first confection she gives them: Moon Rocks, which allow the person eating them to jump great distances. She's a magician, and she manufactures these magical sweets. She's not the only one in town. To say nothing of the guy who shows up in town to hunt magicians...

If the cutesy premise (magical candy that gives kids superpowers!) sounds sweet and fluffy... Don't be fooled. Things will get much, much worse before the end, and our four Kid Heroes will quickly find themselves in far over their head...

The sequel, The Arcade Catastrophe, takes place one year after the events of the original. A new family fun center, called Arcadeland, opens up in Colson, and many local kids seem to be addicted to trying to collect tickets from the machines. The Blue Falcons quickly figure out that a new magician is in town and trying to recruit children to their ends. This would be suspicious enough, except that two extremely powerful people have just gone missing: John Dart, who polices nefarious magicians, and Mozag, the most powerful magician in the world. The Blue Falcons quickly connect the dots, and soon find themselves dragged into a new web of magical mayhem: This magician gives out ink stamps which bestow powerful effects. The problem? There are many, many other kids who've been taken in. And while the Falcons know what magicians are capable of, these new kids aren't...