Film / W.R.: Mysteries of the Organism 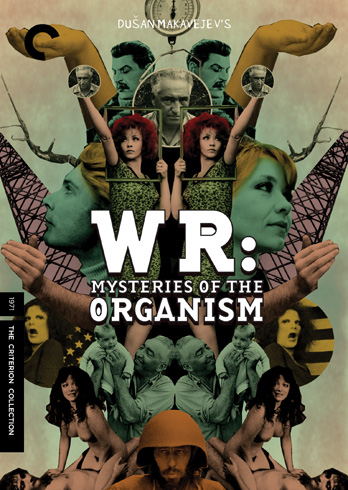 It gets weirder...
Advertisement:

It's a very unusual mixture of documentary, comedy, and art house film. Roughly the first third of the film consists of a pseudo-documentary about the life and work of psychoanalyst Wilhelm Reich; who was once an associate of Sigmund Freud. Wilhelm Reich had this theory that the essence of life consisted of sexual energy called "Orgone". He believed that diseases such as cancer were caused by an inhibited orgonal flow, and he constructed chambers called "orgone accumulators" that would infuse people with orgone energy to cure them and improve their sexual potency. Originally from eastern Europe; Reich was a devoted communist who believed that the only way the USSR could achieve utopia was by advocating free sexuality, thus resulting in uninhibited orgonal flow. Uh-huh. Reich was booted out of the USSR and he wound up in Nazi Germany, where he was booted out again to America. Here, he got persecuted as a crackpot and his books were burned. One thing that may have contributed to this could possibly be that one of his therapies involved having patients engage in orgies.

...Anyways, the remaining two thirds of the film revolve around a (fictional) Yugoslavian woman who is an advocate of Reich's theories as she romances a Russian ice skater named Vladimir Illych. He beheads her with his skate when he has an orgasm.

Of the numerous films of the late '60s and early '70s that positively gloried in the sexual revolution and the release of social shackles on free expression in general, W.R.: Mysteries of the Organism is one of the most ambitious, most confused, and downright weirdest. It was also one of the most controversial, its numerous nude sex scenes and frank dialog about masturbation and sexual stimulation ensuring both substantial audiences and outcries from Moral Guardians. In some ways, it's a brilliant piece of art, in others, it's an incoherent mess. In any case W.R. may be the only avant-garde slapstick communist documentary sex romp ever made, and that alone makes it a must-see.

Is the first in a loose unofficial trilogy followed by Sweet Movie and Montenegro.

Compare A Serbian Film, another film made in Serbia that stirred up controversy in its home country (though far more disturbing and less quirky than W.R.).