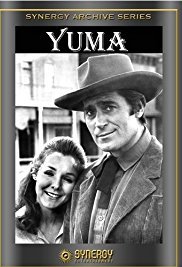 A U.S. Marshal's life is threatened when he tries to clean up a lawless town ...
Advertisement:

Dave Harmon is a US Marshall who has been assigned to the Yuma territory. Unfortunately for him, Yuma is notorious for being borderline anarchy and driving its lawmen away quickly. Not helped is the fact that the richest man in the county has two criminal brothers. When Harmon tries to lay down the law and is forced to shoot King's brother, a group of corrupt soldiers shoot the other to frame Harmon. Harmon must go on a quest to clear his name before King returns to exact brutal vengeance while saving the local Native American tribe from starving due to the corruption.

The film was supposed to be the pilot for a TV series, but it never got picked up. Not to be confused with either version of 3:10 to Yuma.