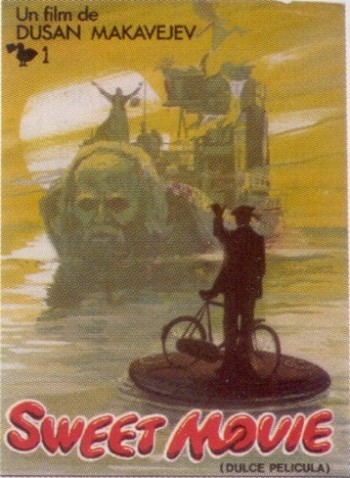 The film charts the... quirky journeys of two women. One woman, Miss Canada (Carole Laure), representing modern commodity culture, wins a virginity auction (she's such a virgin, her vagina literally glows!) and is betrothed to eminent milk tycoon/millionaire Mr. Kapital. On their wedding night, however, he drops his pants to reveal his dong is made of solid gold, and then urinates all over her. Understandably unenthralled, Miss Canada complains to her ma in law, only for her to shrug it off and nearly drown her. She then has the family's big, black henchman take her to her into a water tower to "loosen her up". The poor gal is then packed into a suitcase and taken to Paris, where she meets and has sex with a Mexican pop star whose penis gets stuck inside her when they are spotted by a group of nuns. She then falls in with a clan of weirdos who engage in an orgy where they eat a banquet and then vomit it all up and urinate over it before eating it again, and then engage in a "re-birthing" ritual in which they suckle milk from one of the clan member's breasts. Finally, she stars in a commercial in which she masturbates in a vat of chocolate.

The second woman, Anna Planeta (Anna Prucnal), is a failed communist revolutionary piloting a boat down a river that is full of candy and sugar and which has a big bust of Karl Marx attatched to the front. She invites a sailor, who turns out to be an immortal wanderer who participated in the 1905 revolution aboard and has an affair with him, in which they have sex rolling around in the sugar, but she eventually stabs him. She also invites some little boys aboard and performs a strip dance in front of them in a tattered wedding gown (and this, unfortunately, is clearly not simulated) before murdering them. The police find the bodies and arrest her. The final shot of the film is of the boys being reborn out of the body bags.

In short, it's everything that typifies Euroshlock, and then some.

Is the second in a loose unofficial trilogy preceded by W.R.: Mysteries of the Organism and followed by Montenegro.