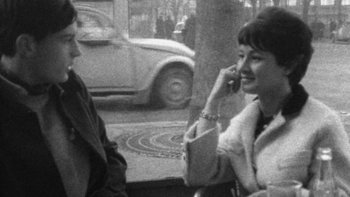 Suzanne's Career (French: La Carrière de Suzanne) is a 1963 film (at 54 minutes, it gets variously grouped as a short, a featurette and a short feature) written and directed by Éric Rohmer, the second of his Six Moral Tales.

Bertrand (Philippe Beuzen) is a pharmacy student in Paris. One day he goes to a cafè with his friend Guillaume (Christian Charrière), and they encounter Suzanne (Catherine Sée), a part-time student and office worker, who is cute, intelligent and charming, but also seems a bit naïve. Guillaume, a Casanova Wannabe, very brazenly attempts to seduce her, and she falls in love with him. But Guillaume sees her as just another conquest and continues to hang out with her mainly as a courtesy. To make him jealous, Suzanne starts pursuing Bertrand, who sees her as a bit of a pest and a distraction from the woman he really loves, her friend Sophie (Diane Wilkinson). Ultimately, Suzanne spends the night with Bertrand, not as a lover but as a guest when she can't afford to get home. The next morning after she leaves, Bertrand discovers that some money that he'd hidden in a book had been stolen. He realizes that Suzanne might be more clever and complex than he'd suspected.

Like its companion piece The Bakery Girl of Monceau, it didn't get a theatrical release until 1974, but it aired on French television in prime time in 1966, giving Rohmer his first widespread exposure as director since the release of his debut The Sign of Leo in 1959.