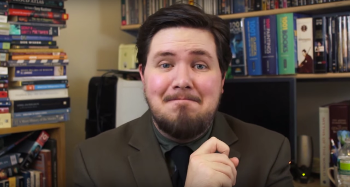 The books around him symbolize the breadth of his knowledge. His computer's there because this happens to be his living room.
"[M]y primary goal: to get people in nerd culture to explore highbrow culture."
Advertisement:

Brows Held High is a film analysis show about arthouse cinema. It is hosted by Kyle Kallgren (formerly known as Oancitizen), who rose to some prominence on the That Guy With The Glasses forums when he wrote a dissertation

on Nella's My Little Pony epic.

His signature style usually involves a lot of high-brow intellectual concepts, but explained well enough that they don't go over viewer's heads. The show was originally more overtly comedic, but has since changed its tone to be more on the analytical side of things, while still maintaining Kallgren's understated, quirky sense of humor as a major element.

Now has a "Best Episode" Crowner