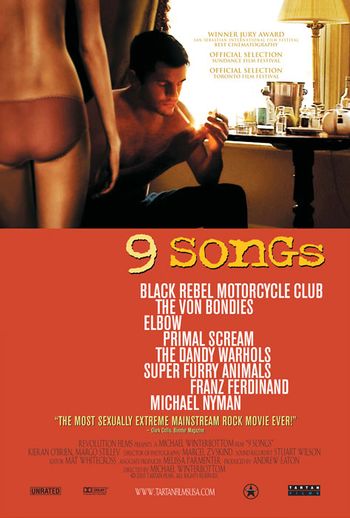 9 Songs is a 2004 British Romance/Drama film directed by Michael Winterbottom.

Over a period of a single year, British Antarctic researcher Matt (Kieran O'Brien) has an affair with American foreign exchange student Lisa (Margo Stilley) in London. During these 12 months, they attend nine rock concerts (which owe the film its title). In between these rock concerts, they have sex.

Alas, the sex eventually becomes bland and unsatisfying, and at the end of the 12 months Lisa abruptly ends the romance by going back to America; leaving Matt, now in Antarctica, to tell the film in Flashback.

The message of the film, as far as it can be discerned, is that a purely physical relationship can only provide so much fulfillment; that eventually, without a lasting emotional relationship to compliment it, it will wither and die.