Western Animation / We Are the Strange 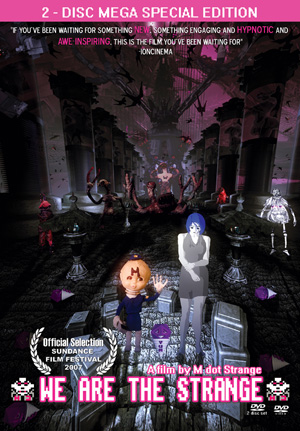 Children Love The Ice Cream!
"This isn't your Father's animation"
—An apt description from one of the trailers

We Are The Strange is an independent feature-length animated film. It was made by a guy who called himself M dot Strange that premiered in Sundance in 2007 and has since been released on DVD. It can also be seen for free on YouTube here

In the months leading up to Sundance, the movie got considerable attention, due to this trailer

The animation is best described as Medium Blending (although the filmmaker uses the term, str8nime): The environments were computer animated, but most of the characters were stop-motion puppets (though there were at least three exceptions in the main cast).

One particularly remarkable thing about the film is that M dot Strange wrote, produced, directed, and animated the whole movie by himself. Apparently the only help he had was with the music, some of the art design, and the voice acting.

The plot: A young resident of Stopmo City named Blue runs away to a nearby forest to get away from an abusive boss/boyfriend. There, she meets a lonely outcast named eMMM. Having a doll's head in lieu of a real head, eMMM cannot speak or change his facial expression. His means of communication is limited to body language and random squeaks. Meanwhile, two criminals, Rain and Ori, are back in the city, wandering around and fighting monsters for... some reason. eMMM convinces Blue to return to the city with him so that they can go buy some ice cream together. Then some more monsters attack for... some reason. It all climaxes in a huge battle between two Giant Mechas over a devastated cityscape.

In other words, this is as far from a conventional story as you're likely to find (hard-to-follow doesn't even begin to describe it). In fact, now might be a good time to mention that one of the filmmaker's main influences was David Lynch.

Fun fact: L33t and Nadsat were among the many optional subtitles made available on the DVD.

This Work Contains Examples Of