Art / The Birth of Venus (Botticelli) 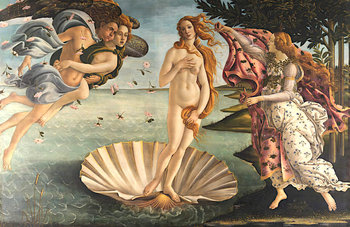 The Birth of Venus is a Tempera painting created by the Early Italian Renaissance painter Sandro Botticelli finished in 1486. It depicts the goddess Venus of Classical Mythology arriving at the shore after her birth, when she had emerged from the sea fully-grown (called Venus Anadyomene and often depicted in art). While not the only painting to take the name The Birth of Venus, Botticelli's painting is definitely the most recognizable.

The painting is currently on display in the Uffizi Gallery in Florence, Italy.

For Art Imitates Art references and parodies, see The Burlesque of Venus.

Not to be confused with the Venus de Milo, the William-Adolphe Bouguereau painting or the Alexandre Cabanel painting.

The Birth of Venus provides examples of: