Art / The Birth of Venus (Bouguereau) 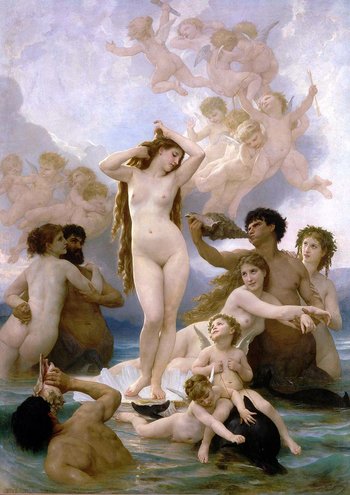 The Birth of Venus (French: La Naissance de Vénus) is one of the most famous paintings by 19th-century painter William-Adolphe Bouguereau. It depicts not the actual birth of Venus from the sea, but her transportation in a shell as a fully mature woman from the sea to Paphos in Cyprus. She is considered the epitome of the Classical Greek and Roman ideal of the female form and beauty, on par with Venus de Milo.

The painting was created for the Paris Salon of 1879. It was awarded the Grand Prix de Rome, and was purchased by the state for the Musée du Luxembourg. The painting is now in the permanent collection of the Musée d'Orsay in Paris.

Not to be confused with the Botticelli and Cabanel paintings of the same name.

The Birth of Venus provides examples of: