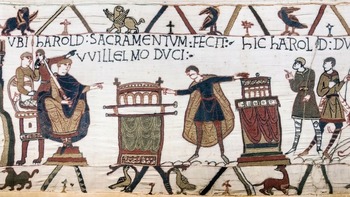 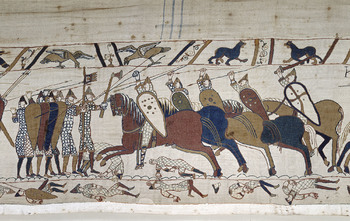 The battle rages at Hastings.
Advertisement:

The Bayeux Tapestry (French: La Tapisserie de Bayeux), also known as "Telle du Conquest" and "Embroidery of Queen Mathilde", is an embroidered strip of cloth that's nearly 70 meters (230 ft) long and 50 centimetres (20 in) tall and dates back to the second half of the 11th century, right at the turn between the Low and High Middle Ages. It can be seen here

It depicts the events leading up to the Norman conquest of England and concerns William, Duke of Normandy and Harold Godwinson, Earl of Wessex, later King of England as Harold II, and culminates in the conquest itself and the battle of Hastings on October 14, 1066. It was made within a few years after the battle and ended up named after Bayeux, the French city it was kept in the cathedral of for centuries, but it is now agreed to have been made in England.

The events the tapestry depicts are told solely from the Norman perspective (as it was commissioned by Norman bishop Odo of Bayeux), and numerous minor amendments have been made during restoration, possibly altering the original appearance/context of some scenes. The end section is missing; it could have contained the coronation of William the Conqueror on December 25th, 1066. The tapestry is still preserved in Bayeux, in a large museum that's entirely dedicated to it.

Effectively a vast medieval comic, the tapestry tells the events in a sprawling, colourful, Latin-annotated pictorial form, and remains one of the most important iconographic sources for Western Europe in the 11th century. Its unique nature and striking visuals have inspired many opening credits for depictions of The Middle Ages in popular culture, though almost always anachronistically so considering the scarcity of modern works that are actually set in the late 11th century.

The Bayeux Tapestry provides examples of:

Works that have references to the Bayeux Tapestry or feature it: